Vegging Out in France

Long ago, I decided that I would switch to vegetarianism during my trip to France with the UCSB Chamber Choir. We have had a lot of group meals that were provided by host families or prepared especially for us by restaurants, so I knew sticking to veganism would be difficult, if not impossible, and I didn’t want to be living on Clif Bars (though I did pack about twenty of them just in case).

It’s not that it makes any less sense to be a vegan in France. In fact, I was tempted to launch into an aggressive tirade on more than one occasion when some of my traveling companions ordered foie gras. Foie gras is goose liver, after the goose has been force fed corn. In terms of animal cruelty, it’s about the equivalent of drowning a kitten… and paying an exorbitant amount of money to do it.

I’m back to being a vegan now, and I’m still in the airport in Paris. That’s because the airport in Paris is the most vegan friendly place in France, apparently. Right next to my departure gate, there’s a restaurant called EXKI. Its slogan is “natural, fresh, and ready,” and there is a picture of a carrot instead of the “I” at the end of the word, so obviously I headed there immediately. All their food is organic and much of it is gluten-free and/or vegan; I got a lentil salad (organic green lentils, peas, sweet and sour onions, red pepper, artichoke, olive oil, and balsamic vinegar) and carrot and coriander soup.

Despite the amazing EXKI in the airport, France doesn’t seem too concerned about catering to vegans. If I had been able to cook my own food I would have had no problems, but as I said, I was usually grabbing lunch at a restaurant with a group of five other people. But eating vegetarian in France has been quite easy. I have eaten a lot of veggie quiche and unpasteurized cheese, going out of my way to eat vegan whenever I can.

At first I thought it would be possible to put meals together the way I do at vegan-unfriendly places in the United States: by combining many different vegan side dishes. But I soon realized that wouldn’t get me anywhere. That’s because restaurants in France love to douse things in mayonnaise. It’s as if someone gifted France a huge tub of mayonnaise and France thought to itself, “How am I ever going to use up all this mayonnaise? I know. I’ll put it all over everything, no matter how ridiculous the combination.” So you think you’re going to order a delicious side of raw mixed veggies? Sorry, they’re covered in mayonnaise. Enjoy.

I used Yelp.com to research vegetarian-friendly places in Paris, and on a few occasions I was able to convince a good chunk of meat-eaters to accompany me to check them out. The most successful vegetarian outing in Paris was to Pom’Cannelle, a cozy little restaurant on the isle of Saint-Louis. The servers were quite accommodating and friendly, pointing out all the different vegetarian options on the menu. I went for the Quiche Provencal, which came with a mixed salad and looked like this: 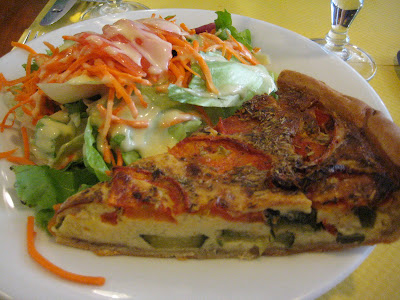 The best part about Pom’Cannelle was that everyone who went with me said it was the yummiest meal they had eaten so far. They got meat dishes and I got a veggie dish and everyone was happy. I love it when that happens.

In Tours, our meals were provided by a restaurant called Cinema Studio near the Conservatoire Francis Poulenc. I was delighted to discover that almost every meal was vegetarian (and fresh). Tours is much more compact than Paris, obviously, so it was easier to find tasty veggie dishes for the meals we had to buy ourselves. One night, I stumbled upon a little place called