Anyone who knows me knows that I basically subsist on peanut butter toast. But I spent a couple of summers studying in Italy and guess what they don’t have in Italy? Peanut butter for under twelve euro a jar. So I discovered nutella, an incredible spreadable combination of hazelnuts and milk chocolate.

Upon returning from Italy, I realized that nutella was also available in the States. In fact, my college roommate Vicky had been eating it by the heaping spoonful right in front of my face for months and I hadn’t even noticed.

Nutella became a treat for me – not a dietary staple like peanut butter, but definitely something I liked to have around for all-night paper writing and/or all-night dramatic relationship mourning.

Unfortunately, nutella does not exist in vegan form, so I hadn’t experienced its chocolately hazelnutty goodness for about eight months. When my friend Linda sent me this recipe from The Family Kitchen at Babble.com, I decided to veganize it and make my own. Here's how I did it: 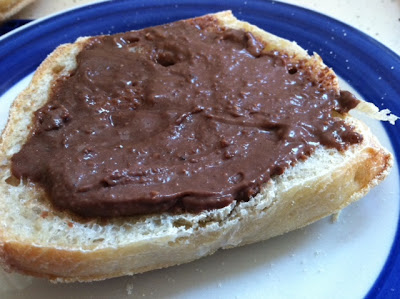 I was substituting soy powder for powdered milk, almond milk for whole milk, agave nectar for honey, and vegan chocolate chips for milk chocolate. Obviously, I would need to make an epic trip to Whole Foods.

I know I shouldn’t have been surprised that hazelnuts are expensive. I guess I just didn’t expect to drop roughly the equivalent cost of a shoddy liver transplant on two cups of hazelnuts and a can of soy powder. But I was committed, so I splurged.

I got home from Whole Foods and immediately got to work. First, I spread the hazelnuts out on a baking sheet and toasted them at 400 degrees for ten minutes.

While they toasted (making the whole cottage smell delicious), I brought the soy powder, almond milk, agave nectar, and salt to a boil on the stove top. Once it boiled, I brought it down to a simmer and let it hang out while I dealt with the chocolate chips.

Because I don’t have a double boiler, I had to melt the chocolate chips in the microwave. It was pretty easy; I just had to heat them in thirty-second increments so they didn’t burn. By that time, the hazelnuts were ready.

I removed them from the oven and scooped them into a tea towel that belongs to my roommate, Erin (she is fancy and owns things like tea towels). Then I pulled off a maneuver that can best be described as vigorous massaging of the hazelnuts. Rubbing them against each other made their skins pop off (for the most part), and it also made some of them pop out of the tea towel onto the floor. Obviously, I picked them up and ate them off the floor - they had cost me like, a dollar each. 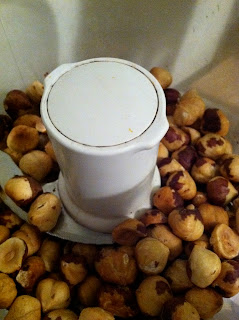 I transferred the naked hazelnuts to the food processor and pulsed them into a pulp. I poured in the melted chocolate and pulsed it all together, then finally added the hot milk mixture and blended that in, too.

My nutella was done! And it was delicious. Erin and I used wooden spoons to scrape it out of the food processor and shamelessly licked the spoons clean while we watched Beauty and the Beast on VHS (yes, we still own a VHS player). Erin said it tasted like a “classier, dark version” of regular nutella. 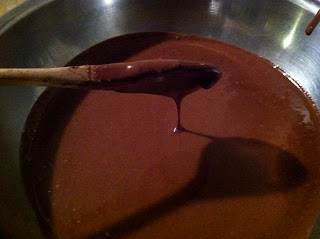 I put the rest of the nutella in the refrigerator so it could become a bit more solid and spreadable; after an hour, it was perfect.

Maybe it’s the fact that I made it myself, but I assert that my vegan nutella tastes better than the real thing. It’s definitely too expensive to make very often, so I’ll just have to make it last as long as I can – though it’s so yummy, rationing it will certainly be a struggle.
Posted by Unknown at 12:07 PM