Last weekend, I learned what it means to love. It means you write haikus.

I was in San Francisco for a conference and in between listening to presentations, I spent as much time as I could with one of my best friends from college, Sam.

Sam is perfect: he is gorgeous, he speaks like eight languages, he has a beautiful tenor singing voice, he gives great advice, he laughs at all my jokes, he's in medical school and has delivered sixteen babies so far, and he's a good listener. He's the love of my life.

Of course, he’s also as gay as a musical theater adaptation of the new Twilight movie.

Sam agreed to go wherever I wanted for dinner on Friday night, so I suggested Loving Hut because of its inviting name. Who doesn't want to eat inside a loving hut?

There are a few locations around the city (and many more around the country and internationally - it's the largest vegan restaurant chain in the world); every location has its own menu, depending on the chef's inspiration.

We went to the Loving Hut in Chinatown because it was within walking distance of my hotel. The restaurant was quite unassuming, with white tables and chairs, beige walls, and a beige tiled floor. There was not much in the way of décor, except for a flat screen TV that played Chinese commercials and music videos on loop.

There was only one other couple in the restaurant, but our waitress gave the impression that she would have been totally comfortable running things when it got crowded. One of the languages Sam thinks he speaks is Chinese, so after we ordered he said, “Thank you!” to our waitress in Chinese. She was a good sport and answered him in Chinese, which he pretended to understand.

All the food was affordably priced (we're talking $5-10), so obviously we were committed to ordering appetizers, a main course, and dessert. We decided to split the pot stickers and golden nuggets as appetizers: 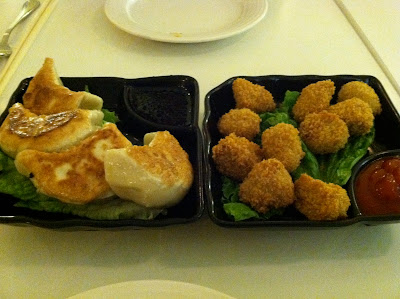 The pot stickers tasted exactly like you would expect, but the golden nuggets were delicious. I guess it's because they were deep-fried. For a main course, Sam ordered the wonton noodle soup with "BBQ soy char-siew" (a beef subsitute) and vegetables:
I ordered the club sandwich, mostly because I was interested to see what a vegan club sandwich would entail. It was layered grilled tofu, tomato, lettuce, vegan "ham," and vegan "mayonnaise" on wheat bread: 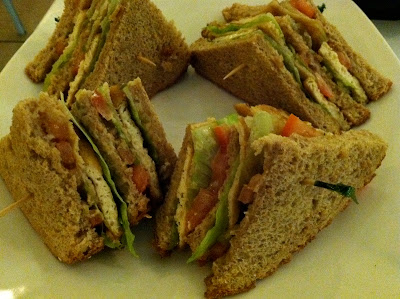 It tasted a lot like a regular club sandwich. I only ate two quarters of it because I was already kind of full from the appetizers (and because I wanted to save room for dessert), and took the rest as an emergency starvation prevention device for the rest of the conference weekend.

There was a whole case of desserts on display and all of them looked tasty. Our waitress made our decision for us when she told us that the cheesecake was homemade.  Sam doesn't really like regular cheesecake, but he said he would split it with me because he loves me (and we were, after all, at the Loving Hut). 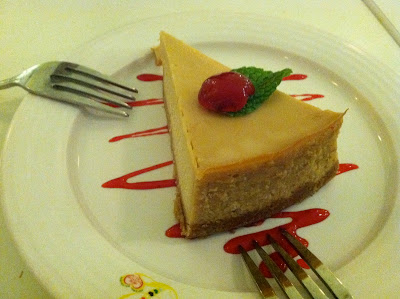 It was so good. Sam ended up eating most of it because I was in the middle of telling him a ridiculous story about the drama in my life, and I couldn't talk and eat at the same time. He said he preferred it to regular cheesecake because it didn't have such a strong cheese flavor. It was dense and sweet, and they really nailed the graham cracker crust.

I wish there were a Loving Hut location in Santa Barbara so I could go there whenever I was in the mood for a vegan love fest. I'll have to settle for buying some of the merchandise off their website - they've got tote bags, animal neck pillows (?), recipe books, etc.

I love Loving Hut.
I went there with my friend Sam.
We ate vegan food.

I love animals,
But I do not think they need
Special neck pillows.
Posted by Unknown at 9:45 AM