Give a Fig: Good Food in Atascadero 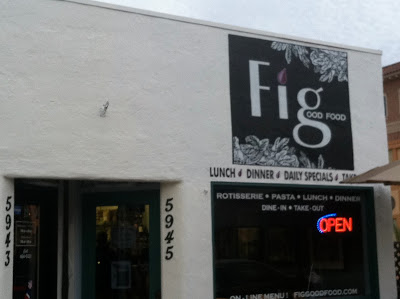 This weekend marks the most important event in the social life of the nation's musicologists: the national conference of the American Musicological Society. It's riveting. Lucky for this aspiring musicologist, the conference is in San Francisco this year.

Considering how much I love San Francisco, I spend not nearly enough time here. Though conference food is, as a rule, vegan-unfriendly (packaged pastries and powdered creamer, anyone?), the restaurants surrounding the Hyatt Regency promise a variety of vegan taste adventures.

Now that I’ve arrived, I am full of energy (and, after a compelling presentation this morning entitled “Nico Muhley and Post-2000 Chamber Pop,” feel convinced I ought to move to Brooklyn, stalk the likes of Nico Muhley and Sufjan Stevens, and beg them to let me perform with them). But yesterday was a different story.

After teaching three discussion sections on The Marriage of Figaro and substitute-teaching a lecture on program music, I was exhausted and not looking forward to the six-hour drive from Santa Barbara to San Francisco. Luckily, I had my plucky, pleasant-conversationalist friend Linda in the passenger seat and a Tupperware full of leftover homemade vegan nutella for the road.

We decided to meet David, who was on his way back to Santa Barbara from a much-more-boring conference in San Francisco, for dinner in Atascadero. I searched “vegan” on Yelp.com to find a suitable restaurant. When I told Linda that, “I just yelped ‘vegan,’” she pointed out how incomprehensible that statement would have been twenty years ago when “yelp” meant a pitched gasp and “vegan” only referred to those weird neighbors whom nobody wanted to invite to the potluck block party.

Nevertheless, my yelping of “vegan” yielded a promising result: Fig, an independent establishment right off the 101 freeway that serves mostly California-grown organic fare. Chris Dillow, the friendly proprietor, greeted us and took our order at the counter. The tiny space was adorned with line sketches of famous thinkers like Walt Whitman and paintings by local artists. 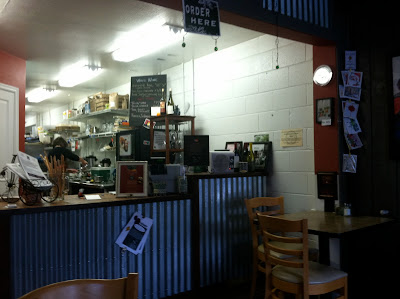 Linda and David both opted for the Tuscan Sun sandwich (dried tomato and olive tapenade, pulled chicken, and melted provolone on a house-baked roll). There were quite a few tempting vegan menu options, and I was feeling a bit chilly so I went with the Moroccan Chickpea and Lentil Stew (quinoa, tomato, onion, celery, ginger, and cilantro): 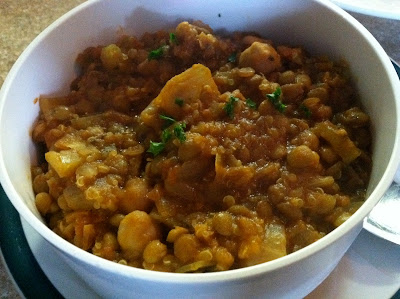 It was flavorful, hearty, and the perfect amount of stew for $6. I also got a side of roasted Windrose Farm potatoes with Kitehawk olive oil, and they were seasoned so perfectly that I devoured them sans condiments.

Chris told us about the renovations that had happened within Fig just last week while she bustled around, making sure we had everything we needed. She made us feel right at home.

Linda and I pilfered two spoons (all their take-out containers and utensils are biodegradable, by the way) for the homemade nutella, but I was so full after my stew that I didn’t even need to snack on it during the rest of the drive (but of course I did anyway – that stuff is good).
Posted by Unknown at 11:29 AM