I get a kick out of words, and I get an even bigger kick out of absurdly specific words. For example, “defenestration” – the act of throwing something or someone out a window – usually only comes up in conversations about Renaissance politics in Prague (or after watching this video).

The word “cete,” which I recently discovered while playing Words With Friends, refers to a group of badgers. I can’t imagine a situation in which I would have to use the word “cete,” but when it happens, I will be delighted.

“Floret” is another one of those too-specific words; it is rarely used, except by people whose job it is to write menus for fancy restaurants. It really only gets used in reference to broccoli or cauliflower. Of the two, broccoli is definitely more prominent in my diet; in fact, I can’t remember the last time I ate cauliflower… before today.

I wanted to invent a dish that would use up the mushrooms I had acquired last week in a misguided spur-of-the-moment grocery purchasing decision. I don’t particularly like mushrooms, at least not enough to make them the star ingredient in a meal, so I figured baking them into a cauliflower-combo dish would make the most of them. 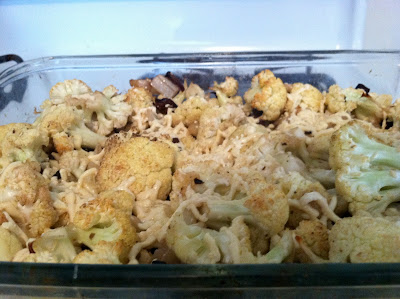 First, I preheated the over to 350 degrees. While it was heating up, I got to break the cauliflower into florets. It was quite fun; I ended up getting carried away and breaking it up into smaller and smaller cute little pieces that I decided to call florettes. 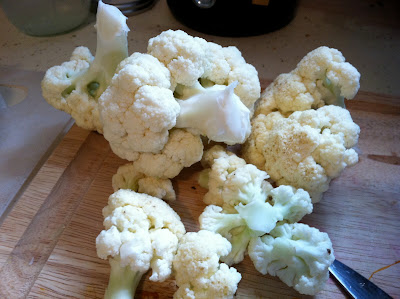 Then I just dumped all the ingredients in a big bowl together and mixed them up as best I could. I wasn’t sure about the proportions at all. I was nervous that five cloves of garlic might be too much (although “too much” is not really in my garlic-related vocabulary), and I wasn’t sure what the sugar would do. I’ve started adding sugar to soy sauce and mustard when I make sauce for grilled veggies, but it might not work the same way when combined with vinegar and garlic.

It was a risk. Worst case scenario, I would just defenestrate the whole thing. I was hoping it wouldn't come to that.

I spread the mixture into a glass baking dish, like so: 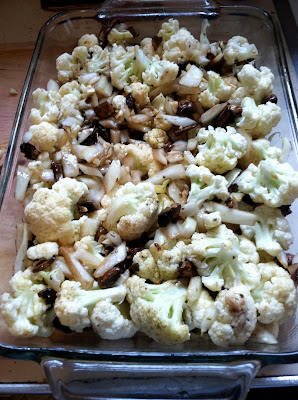 … and baked it for 40 minutes, checking on it and giving it a stir every ten minutes or so. After 40 minutes, I pulled it out of the oven, sprinkled on the Daiya cheese, and stuck it back in for a few more minutes.

The Daiya melted all over it and it tasted so good. The mushroom and balsamic combination worked out well, the sugar didn't get in the way, and it definitely wasn't too garlicky.

The florets were flavorful and stayed fenestrated (which, I imagine, is the opposite of defenestrated), so I count it as a success.
Posted by Unknown at 12:40 PM