Last week at the farmers market, I noticed a new product dominating the booths: persimmons. Embarrassingly, I had never seen a persimmon before, and since I didn’t grow up under Plymouth Rock, I have to assume they’re just not common back in the northeast.

I decided to buy two persimmons because I was intrigued by them. When I asked the woman I bought them from what people usually did with persimmons she said, “Well, you could eat them like an apple… or you could make cookies or something.” Cookies it would be.

This past weekend, my brilliant college roommate, Victoria, was visiting from New York City where she goes to medical school. We spent much of her visit practicing handstands (a yoga move I have just recently mastered and which I am determined to show off whenever the opportunity presents itself).

Despite our rather higher-than-average combined intelligence, we decided to spend Sunday night huddled on my couch watching American Horror Story (the terrifying new FX series), drinking wine and shrieking in fear at every creak and groan that emanated from my 1920s third-world cottage.

When we reacted to the wind rattling the door frame by arming ourselves with a carving knife and a (now empty) wine bottle, I knew we had had enough. We needed a snack to distract us from our imminent demise at the hands of imagined ghouls lurking in the cottage.

I remembered the two persimmons (which I had named Russell Persimmons and Gene Persimmons), just waiting to be made into cookies. I thought adding cinnamon would give the cookies a nice Thanksgiving-ish flavor, and it would also allow me to invent an awesome new word: persimmon + cinnamon = persinnamon. Here’s what we used to make the persinnamon cookies: 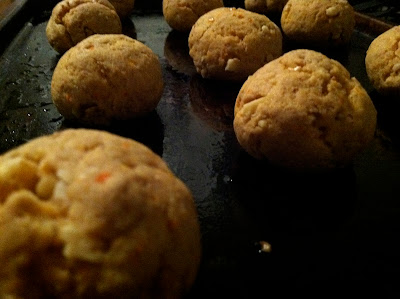 We preheated the oven to 350 degrees. While Victoria chopped the persimmons up into about 1-inch chunks, I combined the flour, baking soda, and cinnamon in a large mixing bowl. I started to beat the sugar, Earth Balance, and water together into a cream, but my arms were exhausted from too many spontaneous handstands so Victoria had to take over: 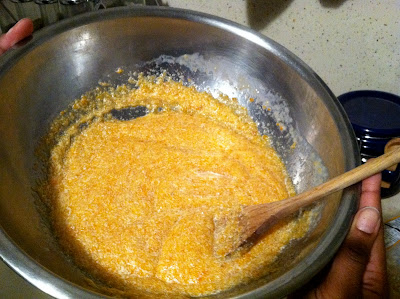 Before putting the chopped persimmons into the food processor, we made the unfortunate decision to pop a couple of the pieces into our mouths. They were disgusting. I didn’t even notice the flavor because the sensation was so awful – the only way to describe it is arid. Even after I had spat my mouthful of persimmon into the trashcan and desperately clawed at my tongue to scrape off any offending residue, my mouth still felt like a desert had exploded inside it.

Victoria and I stared at each other in horror. How could such a terrible fruit exist on this earth? We were tempted to give up our cooking endeavor, but we didn’t want to waste the dry ingredients we had already prepared. Plus, we figured the persimmons wouldn’t be so bad once they were beat into a pulp and combined with tasty things like Earth Balance and sugar.

We pulsed the persimmons in the food processor until they were a smooth pulp: 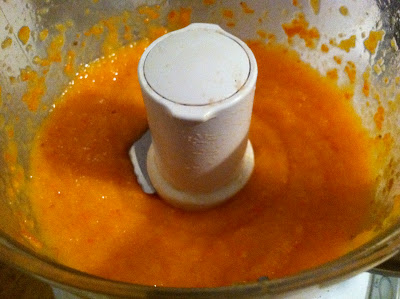 Then we added the pulp to the sugar mixture and slowly stirred in the dry ingredients. Finally, we mixed in the walnuts and used our hands to shape 1-inch balls of dough. We baked them for 10 minutes.

Surprisingly, they didn’t expand at all; they cooked through, but maintained their little ball shape. So for the next batch, we flattened them out a bit so they would come out looking like normal cookies.

Despite the awfulness of the persimmons themselves, the cookies tasted great. They were a strange purplish color, but I didn't mind because I like purple things, generally. The cinnamon definitely gave them a little holiday kick, and since the aridity of the persimmons was canceled out by the moisture of the other ingredients, their sweet flavor came through.

We nommed on the persinnamon cookies while watching the rest of the American Horror Story episode, and kept a couple of extras nearby: if aimed properly, those little cookie balls could serve as effective weapons against intruding serial killers.
Posted by Unknown at 12:47 PM