I realize this is the second cookie recipe I’ve posted in a row. If that bothers you… well, sorry I’m not sorry. It’s Christmastime, Mr. Grinch!

Besides, I had to post this recipe because of the amazed reaction it got from my omnivorous friends. There is something quite satisfying about omnivores trying something I've made and remarking, “This is vegan?!” It’s the exact opposite of the feeling I get when I totally botch calculating the tip at a restaurant and my friends exclaim in disbelief, “You went to Harvard?!”

But as I got started on my chocolate chunk cookies, I was beginning to wish I had paid more attention in the one math class I took as an undergraduate. Or, you know, in sixth grade when I learned how to add fractions. I was trying to do math in my head (calculating the ratio of dry ingredients to wet ingredients can be tricky!) and I ended up adding altogether too many chocolate chunks.

Okay, full disclosure: I got a little excited and just dumped in the whole 10-oz bag. These cookies turned out to be little more than some cookie dough holding together ridiculous amounts of chocolate chunks.

I was baking the cookies to bring to the sparkle-themed Christmas party my friends Katie and Kacey were hosting (don’t act surprised that I have the type of friends who throw sparkle-themed parties). Since I (incredibly) don’t own any sparkly clothing or accessories, I figured I’d better bring some delicious cookies to make up for it.

As unbelievable as it sounds, I had thus far not invented a recipe for vegan chocolate chip cookies. Back in my very early days as a vegan, I turned to a helpful instructional video for a recipe that worked just fine. But now it was time to get creative! I had a bag of vegan dark chocolate chunks in my refrigerator so I decided to go for it – chocolate chip cookies are pretty hard to mess up, I figured. 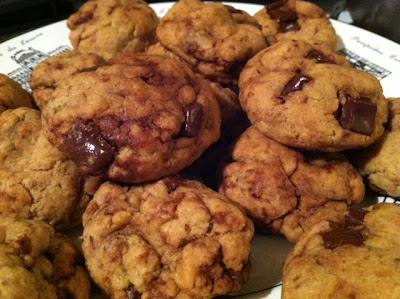 While the oven preheated to 350 degrees, I mixed the flour, baking soda, and salt in a large bowl together. Then I melted the Earth Balance, brown sugar, and white sugar together in a sauce pan on the stove top, over medium heat. I just wanted to see what would happen if instead of melting the butter substitute on its own, I made a yummy sugary mixture all at once.

When the Earth Balance and sugar were melted, I added the flax meal + water combination and the vanilla extract and stirred it all together. It was tempting to just drink it straight out of the sauce pan - it smelled delicious - but it was scalding hot so I abstained.

Then I poured the hot, wet ingredients into the bowl of dry ingredients and mixed it all together. It has since occurred to me that this is backward from the usual combination method - dry ingredients slowly stirred in to wet ingredients - but hey, I never took a baking class at Harvard. If they even offered one (and I have a sneaking suspicion they did), I would have been too busy not learning how to calculate a tip properly to enroll, anyway.

When the batter was all sticky and gooey, I dumped in an entire 10 oz. bag of dark chocolate chunks. Then I packed the batter into little 2-inch balls and arranged them on a cookie sheet. I baked the cookies for just eight minutes, since I wanted them to be moister than the gingerbread crisps I had baked a few days earlier.

It worked! They were a total hit at the sparkle-themed party. I had the satisfaction of smiling and shouting, "Yes!" when person after person approached me to exclaim something along the lines of, "Christ! These cookies are vegan?!" These were the messiest, gooiest chocolate chunk cookies I'd ever eaten. I think they more than made up for my lack of sparkles.
Posted by Unknown at 1:25 PM