Before I went vegan, one of my favorite things in the world (I’m talking right behind bursting into joyful song in inappropriate unusual situations) was brunch. I once told my friend Nadia, over brunch, that I could never be a vegan for the simple reason that bacon... exists. About a week later, I went vegan.

My character inconsistencies aside, brunch is awesome and anyone who says otherwise is not my friend. Unfortunately, that’s probably why I don’t have any vegan friends: brunch is generally not a vegan-friendly meal. Bacon? No. Eggs? Duh, no. Coffee?! You try asking the haggard diner waitress if she could please bring you some soy milk.

But it’s the brunch experience that I really miss – waking up too late to eat a proper breakfast and walking over to a breakfast-all-day diner, drinking bottomless coffees and chatting about any old thing (but probably all the fun you had the night before).

So when my bouncy, recently tattooed friend Amanda suggested we check out a new vegetarian brunch place after our hot yoga class, I jumped at the opportunity. It’s called Veggie Galaxy, it opened a few months ago in Central Square, and I should point out that it’s not only a brunch place. They serve breakfast all day, but they also serve dinner and vegan desserts.

The founder, Adam, had a similar brunch-withdrawal experience to mine when he decided to go vegetarian. As he explains on the Veggie Galaxy website:


“After becoming vegetarian, the menu selections at diners narrowed for me. No more Club sandwich, tuna melt or meatloaf. No Reuben, no BLT, no eggs Benedict with a nice thick slice of Canadian bacon. I still loved going to diners, but always ended up with either an omelet or pancakes.”

So he founded Veggie Galaxy to fill that vegetarian diner gap. I say an omelet or pancakes beats watery oatmeal, which is what vegans have to call a meal at most diners, but I digress. Last week, Amanda and I bopped over to Veggie Galaxy after class. We were all sweaty and yoga-y.
I was ready to gain back the ten pounds of water weight I’d just sweated off, so we started with a “Vanilla Zebra” coconut milk shake: 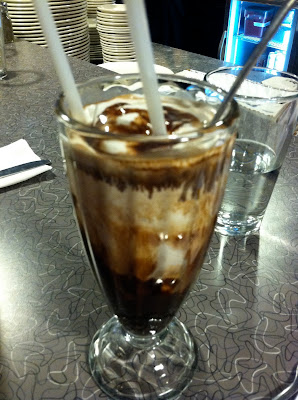 As we sipped the shake, I looked around the restaurant. Almost everyone who worked there could be described as “biker/hipster.” And by “biker,” I mean bicyclist. They were thin and covered in tattoos, most wore thick-rimmed glasses, and men and women alike had haircuts that involved some variety of spikiness. I am not sure this style even exists in Santa Barbara, but apparently it’s a scene in Cambridge. Amanda sighed and said with admiration, “I bet all those line cooks work as bike messengers during the day.”

I was so enticed by the dinner menu that I didn’t even end up ordering vegan brunch. But it’s nice to know a place exists where I could order vegan brunch, if I felt like it. I went with the vegetable pot pie (roasted seasonal vegetables, house smoked tofu, mushroom gravy, tarragon basil pesto), because I haven’t had pot pie since I’ve been a vegan. It’s just one of those things I never think to make for myself.

This pot pie was served with a side of mashed sweet potatoes, which was to die for. Those biker/hipster line cooks really know what they’re doing when it comes to mashing sweet potatoes: 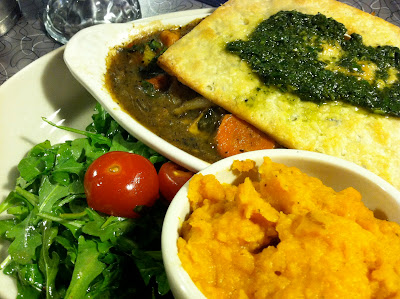 Amanda got the “Kendall Square” (a vegan burger with roasted red pepper puree, beer battered onion rings, roasted garlic mayo, and baby argula) with red cabbage slaw. She chose this particular burger because it came with huge onion rings on top of it: 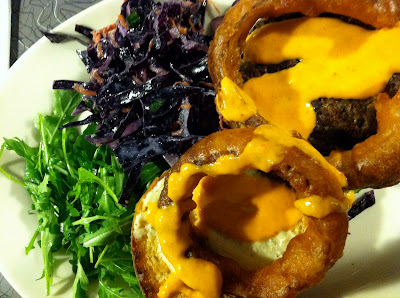 Although I had been determined to save room for dessert (Veggie Galaxy is also a vegan bakery), the coconut milk shake had made it difficult to even finish the last bites of our delicious entrees. Dessert just wasn’t gonna happen.

But I will be back! And I really want to rediscover Veggie Planet, Veggie Galaxy’s sister restaurant, in Harvard Square, my old flouncing stomping grounds.
Posted by Unknown at 7:06 PM