Before last week, I only used the word "sublime" in reference to the 19th-century literary concept (or the ska punk band whose 1996 hit "What I Got" made me wish my mom smoked pot so I could sing about not getting angry). But Sublime is also the name of what seems to be the only 100% vegan restaurant in Fort Lauderdale, Florida. And "sublime" is a pretty good descriptor of the meal I ate there on Wednesday night with Victoria and Kinley.

In addition to a bunch of food-related awards, Sublime has won the Zagat award for décor, and it’s obvious why: the atmosphere feels like a swanky restaurant in a hotel lobby. Palm trees extend toward skylights and there is even one of those fancy walls that look like they’re made of falling water.

But what stuck out to me the most, as ridiculous as this sounds, was the bathroom soundtrack. I noticed pretty quickly that the musical accompaniment to my bathroom, er, activities was a catchy tune with lyrics along the lines of, "Germs and dirt can make you sick, so wash your hands – quick, quick, quick!" It was reminiscent of those instructional songs that maniacally happy traveling groups perform for impressionable children in elementary school multi-purpose rooms.

As I washed my hands – over and over, compulsively, since the song was making me anxious – I waited to hear what would come next. Was this an entire CD of similar cleanliness-themed children’s songs? The "Wash, wash, wash" song ended… and then it started right back up again. It was playing on loop!

Baffled not only as a patron of the restaurant but as a musicologist, I left the bathroom to report back to Victoria and Kinley. Obviously, they jumped up immediately to go experience the "Wash your hands" soundtrack for themselves. In between hilarious trips to the bathroom, we managed to immensely enjoy our meals.

We started with the gardein sliders, which were topped with Daiya cheddar cheese. There were four of them, which meant that we each got one and then had to awkwardly slice the fourth one into three equal parts: 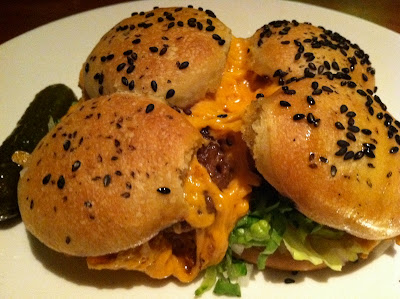 Our waiter, Julian (who was quite knowledgable and helpful), brought out some complimentary pesto polenta to have with our sliders as an appetizer. This dish started off on the right foot with me by being complimentary. But beyond that, its texture and pesto flavoring made it much more interesting than the boring bread most restaurants bring you: 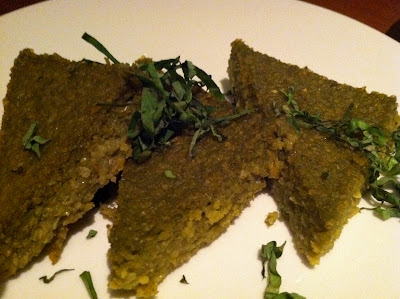 For my main dish, I went with the mushroom ravioli. The combination of tomato "butter" sauce, basil, and whatever delicious ingredients they put into the cashew cream was incredible. I’m glad I ordered the large size, because I ate them all up rather quickly: 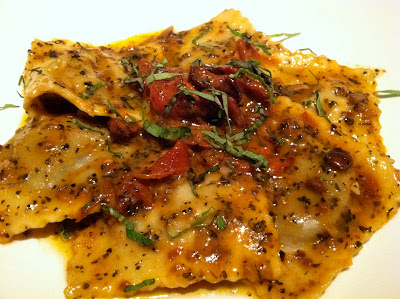 Kinley, who has been a vegetarian for over a year, opted for the Singapore Street Noodles (rice noodles, Asian vegetables, red pepper, water chestnut, curry, ginger, cilantro, basil, and chili sriracha sauce). She gave me a little bit to try, but they were too spicy for me: 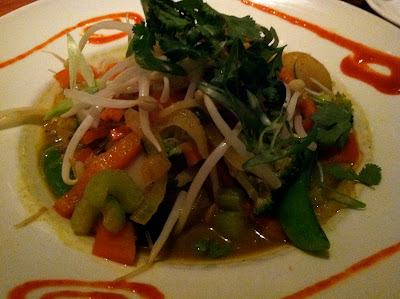 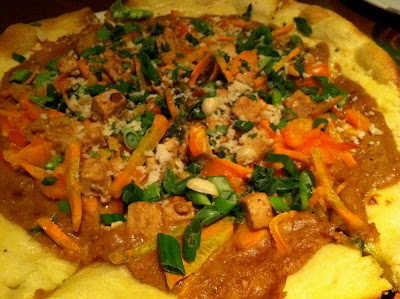 We shared a bottle of cabernet sauvignon from La Parra vegan winery in Chile. The fact that Sublime, an all-vegan restaurant, offers some wines from non-certified-vegan wineries makes me feel less self-conscious about my lack of wine discrimination. If it’s wine – especially if it’s red wine – I’ll drink it, certified vegan or not.

Julian recommended the coconut cake (white cake with a coconut butter crème) for dessert, and obviously I took his advice. It was served with an almond tuile ("tuile" is the word you use if you want to refer to a really thin, sweet cookie or wafer but you can’t bring yourself to be un-fancy for even a second), which provided a nice contrast in texture when eaten in the same bite as the moist cake: 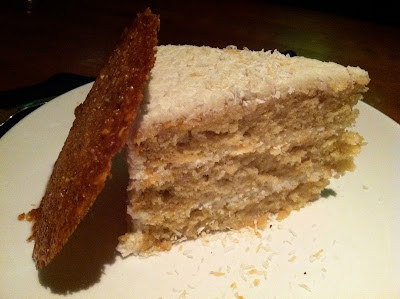 From the complimentary pesto polenta to the heavenly coconut cake, my meal at Sublime was, at the risk of sounding redundant, just sublime.

Except for the bizarre bathroom music, for which I have decided to invent the Meghan the Veghan Award for "Most Ridiculous Bathroom Soundtrack." I listened to the singer’s instructions (I had no choice!) and "wash, wash, washed my hands" so many times and so vigorously that now they’re all red and raw. Gross.
Posted by Unknown at 10:33 AM