I’m on vacation in Fort Lauderdale, visiting one of my best friends from college, Victoria. One of our other best friends, Kinley, showed up a couple days ago and we’ve been reliving our glory days: staying out way too late and making Victoria’s mom come pick us up after last call. It’s a bit embarrassing. The only difference is that now one of us is married (ugh… Kinley…) and we’re all approximately 20% less fun.

I can’t complain. Right now, I’m sitting in a lounge chair next to the pool with my laptop sticking to the tops of my thighs which, like the rest of my sunburned body, are steadily accumulating a slimy film of sweat. It’s awesome.

Why, you might ask, don’t I just take advantage of the similarly hot and sunny weather where I live, in Santa Barbara? The answer, I suppose, is that this type of relaxation is addictive. If I give myself one beach day at home, I will never return from the beach and, consequently, never finish my graduate degree. Give me an inch and I take a mile, you know how it goes with me.

In addition to being my first Florida vacation in years, this is also my first time being a house guest as a vegan. My original strategy was to prepare a vegan dish for everyone else to try along with their normal-people meal, but that strategy has been derailed.

That’s because Victoria’s mother, Martha, discovered a vegetarian Swedish cookbook that had been gifted to her years ago when one of her cousins went through a week-long vegetarian phase. Martha is Colombian, but she learned Swedish for love about thirty years ago and so she went about translating a few vegan recipes I might be interested in. 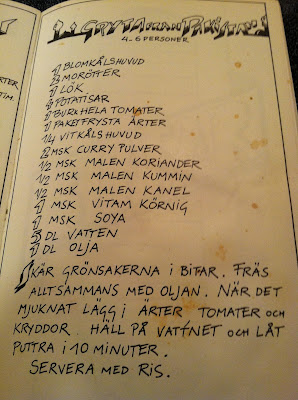 The best part about this meal, other than that it tasted wonderful, was that we all got to participate in preparing it. Martha translated the (rather simple) Swedish directions aloud in her Spanish-accented English and we all got to work.

Here’s what we did: 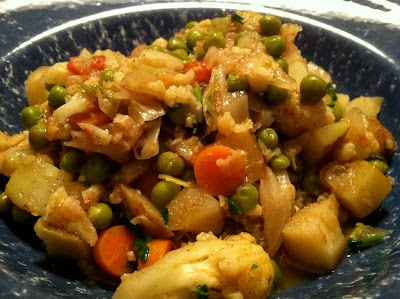 We chopped up the cabbage, cauliflower, carrots, onion, and potatoes, and tossed them into a pot to cook in olive oil on medium heat. It took about ten minutes of stirring for them to become rather tender: 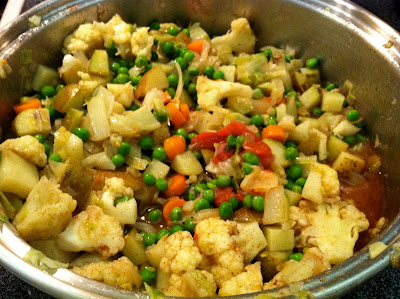 Then we added the peas (a “packet” is obviously a vague amount of peas, but we all like peas so I just dumped in an entire frozen bag), tomatoes, cumin, and cinnamon.

After stirring that all together, we added two cups of water and a handful of salt (Martha told me, “Look away!” as she poured in a ridiculous generous amount of salt) and let the whole thing simmer for ten more minutes.

We served it over the leftover quinoa from the meal I had made the night before, and it was delicious. I have never combined cumin and cinnamon before, but now that I’ve tried it, it seems like an obvious combination.

Everyone went back for second helpings, and Kinley ate the leftovers for breakfast the following morning. In fact, she's eating them right now, and washing them down with a Bloody Mary. Being married makes you so weird.
Posted by Unknown at 9:28 AM