I haven’t always been intimidated by my friend Saloni’s cooking skills. I never noticed what a natural cook she was while we were in college, since we ate the majority of our meals in a dining hall. But last year when I went to visit her at her apartment in Pennsylvania, I realized what kind of force I was dealing with.

This lady was flitting around the kitchen like Ratatouille, adding a pinch of this and a sprinkle of that to the multiple pots and pans on her stove, using a wooden spoon to taste the concoctions in each one, and making thoughtful analyses of what had happened so far, what was happening right then, and what needed to happen next in this whirlwind cooking experience.

She offered to let me help, but we both knew that I wasn’t going to contribute beyond chopping some vegetables, which she would then toss through the air in a graceful arch to land in one of the pots.

At that point in my life, I was subsisting mainly on peanut butter toast, which, as you might know, has only two ingredients: peanut butter and toast. One time I even messed that up, when I got distracted by an episode of The Bachelor schoolwork and let the peanut butter toast get cold. I stuck it back in the toaster oven to heat it up, but when I took it out, the peanut butter had melted all over everything and it stuck to my hands like edible napalm.

But yesterday when I went to visit Saloni at her parents’ house (which is relatively near my parents’ house), I was feeling a bit more confident. Nobody would ever try to convince you that I’m a natural, but over the past nine months of being a vegan, I’ve at least become less of an embarrassing spaz when I try to cook.

Saloni’s mom is gluten-free and mostly vegan, so they decided to make a simple, vegan, gluten-free, Indian-fusion meal for lunch. It’s called cheela in northern India, where Saloni’s parents are from, and chillah in western India. It’s basically an Indian version of a savory crepe. 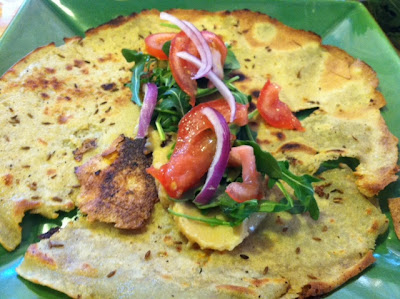 Saloni’s mom is gluten-free, so she makes her own flour out of chickpeas, cannellini beans, and in this case, quinoa. She makes the different kinds of flour herself in her incredibly powerful blender, but apparently you can buy them at stores like Whole Foods. 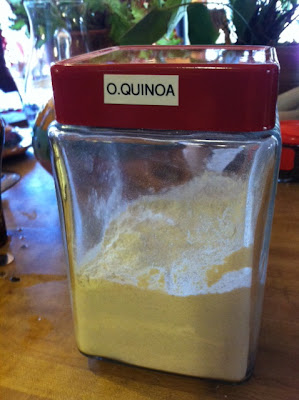 First, she mixed water into the quinoa flour a little bit at a time, stirring it in until the batter had a watery, crepe-like consistency. She said to start in the middle of the dish and stir your way outward, to make sure there aren’t any stealth flour lumps.

Then she spread the olive oil over the entire bottom of the pan and poured the batter in carefully, tilting the pan so the batter would spread out into a thin, even layer. She sprinkled the cumin and salt on top and let it cook for about five minutes, until it was easy to remove it from the pan with a spatula. 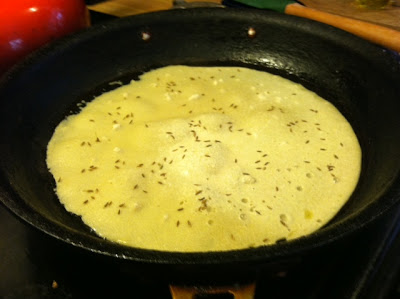 Now comes the fusion part. Traditional cheela is eaten plain or dipped in various sauces, but we ate our cheela like a wrap. We spread a thin layer of lemon hummus over the whole thing and added arugula, tomatoes, and raw onion slices.

It was quite a tasty spin on the basic lunch wrap. I’m visiting Saloni at her house in Pennsylvania over New Years weekend, and I can’t wait to cook up some more yummy vegan meals with her! This time, I won’t be scared.
Posted by Unknown at 7:12 AM