A couple weeks ago, the UCSB music department hosted a holiday party. I ended up getting kind of drunk on wine – not embarrassingly drunk, just kind of drunk – because there was nothing for me to eat except chips and salsa. It struck me that in general, holiday parties are not the best place to be a vegan.

So when my friend Linda (the plucky Mendelssohn scholar with whom I drove up to San Francisco last month) told me about her husband’s vegan Christmas candy recipe, I got excited and demanded she share it with me.

A few days later, I got an email from her equally plucky and slightly sillier husband, Chris. He described the peanut brittle recipe, which has been in his family for generations, with helpful commentary. I think he reads this blog, so he knew that if he didn’t go into great detail, the chances that I would screw up his family’s peanut brittle recipe were about as high as my cholesterol heart rate would be after I inevitably ate the whole tray of it.

I decided to attempt to make the peanut brittle the night before my parents’ annual Christmas caroling party. I couldn’t help but imagine Chris’s great-great-grandmother cooking up a batch of this very same peanut brittle hundreds of years ago over an open fire in one of those old-school cauldrons. In my mind, she looked like a jolly combination of Chris and Linda (although obviously that doesn’t make any sense) and wore a frilly yet practical apron. In this imaginary past, she was a vegan and substituted Earth Balance for the butter the recipe called for. 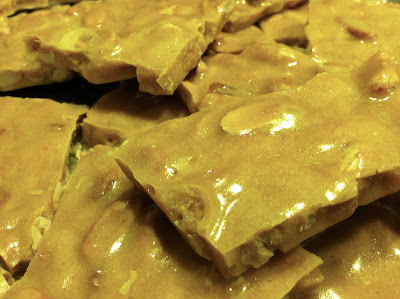 I could not find any red Spanish peanuts at Whole Foods, so I just went with the bulk regular peanuts. Obviously, I had some strong reservations about using corn syrup. I justified it by reasoning that Christmas candy is supposed to be terrible for you, and who am I to get in the way of Christmas? There is a war on Christmas going on, people, and I know what side I’m on. The side of high-fructose corn syrup.

Chris’s instructions indicated that I ought to grease a sheet of foil (or a marble slab, but who has a marble slab?!) beforehand, because I wouldn’t have time to do it while cooking. That made me anxious.

So did the rest of his instructions, actually. He used a lot of italics to emphasize words like “immediately” and “fast,” and just reading through the recipe made me fairly certain I was bound to mess something up.

So I enlisted the help of my little brother, Brian. I figured that way, if the peanut brittle came out terribly, I could blame it on him.
First, we melted the sugar, water, corn syrup, and Earth Balance over medium-high heat in a big pot. When it started to boil, we dumped in the peanuts and stirred the mixture with a wooden spoon. At this point, we inserted the candy thermometer to keep track of the temperature; when it got to 300 degrees, we were supposed to take it off the heat immediately.

That is, apparently, the "hard crack" temperature, at which the candy becomes perfectly brittle. Obviously, I wanted my peanut brittle to be the equivalent of hard crack. Hard Christmas crack. That stuff's addictive.

Chris’s instructions said we would be “stirring constantly” for twenty minutes or so, so I let Brian take care of that (his arms are significantly more built than mine are, since he works out like a maniac), while I helpfully held the candy thermometer in place. I had to hold it so that it wouldn’t touch the bottom of the pot, or its reading would be skewed.

Surprisingly, we weren’t stirring for twenty minutes at all – after only about seven minutes, the thermometer read 300 degrees. I think it’s because we were using an electric stove instead of a cauldron over an open fire, like Chris’s great-great-grandmother. Whatever the reason, we took it off the heat and followed Chris’s next three directions, which read:


- Once you kill the heat, immediately stir in the baking soda. This will make the mixture foam up. Don’t freak. Keep stirring.

- Then, immediately stir in the vanilla. This will make everything smell like toasted marshmallows (and peanuts). Keep stirring all the way to the greased foil/marble slab.

- Dump it, fast fast fast. As close to “all at once” as you can. Luckily, there’s enough oil in the candy that you shouldn’t have too much sticking to the sides of the pot.

Oh, the anxiety! All those italics. As Brian kept stirring like the gym rat he is, I added the baking soda. When it foamed up, I was tempted to freak, but I remembered that Chris’s instructions had explicitly said not to freak. So I remained calm and added the vanilla.

When it was time to dump it (fast, fast, fast!), we recruited my mom as an extra spreader. I poured the molten candy onto the pre-greased foil while she and Brian frantically spread it around with wooden spoons until it just wouldn’t spread any more: 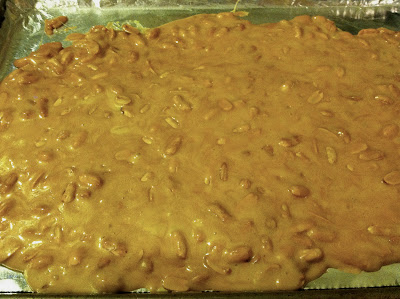 We let it sit for two hours. While we waited, we played Parcheesi and stared at the cooling tray longingly. Finally, it was cool enough to eat:
It was delicious! Perfectly brittle and the right combination of sweet and nutty. And it was a huge hit at the Christmas caroling party. Thanks, Linda and Chris (and Chris’s great-great-grandmother)!
Posted by Unknown at 2:01 PM