Wheat Grass: A Shot at Love

I've always thought of Jamba Juice as kind of "the man" of smoothie shops. I think I saw an improv sketch once in which a Jamba Juice opened down the street from a small, family-owned smoothie shop and put it out of business. But in my new vegan life, Jamba Juice has become indispensable.
They have a new(ish) campaign in which they're pushing "fruit and veggie" smoothies. There are three options: Apples 'n greens, Berry upBEET, and Orange Carrot Karma. I've tried the Apples 'n greens, which is apple-strawberry juice, carrots, spinach, bell pepper, kale, spirulina (!), lettuce, mango, peach, and banana; and the Orange Carrot Karma, which is orange juice, carrot juice, mango, and banana (apparently, at Jamba Juice, mango + banana = karma).
The other day, I was flipping through TV channels trying to find House Hunters International, when I stumbled upon a rerun of Sex and the City. It was Episode 9 from Season 3, "Easy Come, Easy Go" (I had to look that up on Wikipedia - I love Sex and the City but it's not like I have all the episode names memorized), in which Samantha is dating a guy with, as she puts it, "funky spunk."

She tries to solve the problem with wheat grass shots:

I don't think her plan works. But it got me thinking about wheat grass. In addition to the, erm, benefits suggested in the above clip, wheat grass is rich in amino acids and it's rumored to reduce the risk of colon cancer, help blood flow, and generally "detoxify" the body. "Detoxify" has always struck me as a vague hippie word, but it's better than the alternative. I don't want to be toxic.

So I flounced over to Jamba Juice to give wheat grass a "shot," so to speak. Since I didn't know how disgusting it would taste on a scale from "funky" to "vomit worthy," I ordered the smaller sized shot. It came on a little platter with an orange wedge: 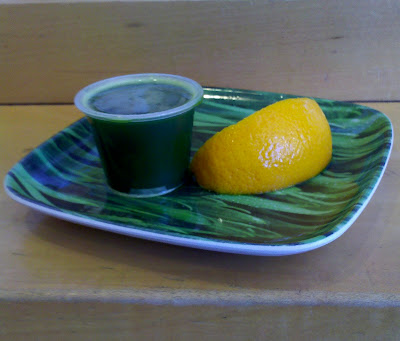 My first instinct was to think of it as a tequila shot with a lemon wedge. But to me, tequila is (often quite literally) vomit worthy. And just thinking about the word "tequila" brought to mind that godawful MTV reality show A Shot of Love with Tila Tequila (also vomit worthy). Things were not working in favor of this wheat grass.

But it was, surprisingly, fine. It wasn't delicious, nor do I feel compelled to make wheat grass shots especially prominent in my diet, but it certainly wasn't nasty.

I'd like to pitch a reality show idea in which, instead of tequila, people do shots of wheat grass. If Sex and the City is to be trusted - of course it is - then the contestants chugging wheat grass would probably have a much better shot at love.