Extra! Extra! Read All About It (For Free)!

Free news is like free dinner on a third date with someone you're just not that into. You want to take it, but you really should pay for it.

I think it's a shame that a lot of trained, talented reporters can't find a job (at least not a paid job) because we've started taking free news on the internet for granted. I'll gladly pay to read my 21st article on the New York Times' website; measures like paywalls are necessary if news sources are going to keep paying their reporters. (The previous link is to the Huffington Post, so you won't waste one of your 20 monthly article views at the New York Times reading about the paywall!).

But even though I believe in the necessity of paying for quality news, I was still kind of bummed when I tried to read an article about veganism in the Santa Barbara News-Press, recommended to me by my friend Paul, and found myself thwarted by a membership fee. I didn't want to pay $60 for a yearly membership, I just wanted to read that one article!

Well, it meant that I had to purchase a print version of the paper for 82 cents. Totally worth it. I've been frustrated with the lack of vegan options in Santa Barbara - which is quite disproportionate to the number of hippie granola-eaters here - so I was thrilled to see the whole food section was dedicated to veganism!

I decided to summarize it here so that people who aren't as dedicated to getting their hands on vegan news will be able to "read all about it" without actually paying to read "it."

I've been to Alchemy Arts Cafe - last week after morning yoga, I was so hungry I couldn't wait to get home to make breakfast. To my delight, I saw a chalkboard on the sidewalk advertising "Vegan Breakfast!" Say no more, Chalkboard! I'm sold. The cafe is attached to a wellness center, and the whole place was much too fancy-looking for me in my sweaty T-shirt and stretch pants: 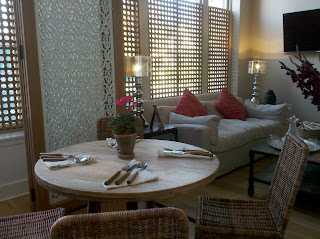 The executive chef, Kai Mueller, took my order and served me. He was quite friendly and helped me put together a delicious bowl of granola, flax seed, blueberries, apples, raisins, almonds, and extra almond milk. A little part of my thrifty identity died when I paid $12 for it, but it was delicious and huge. I got so full that I couldn't finish all that granola-y goodness.

In addition to restaurant reviews, the article in the Santa Barbara News-Press includes a little section on Kathy Freston's book Veganist. She is quoted as saying of veganism, "It's no longer just hippies eating granola and not shaving their legs." As I read that, my heaping spoonful of granola froze halfway to my lips. I self-consciously tucked my week-old-stubbly legs up under me so nobody would see them. Some of us vegans don't have it together yet, Kathy! Sheesh.

The next section I read cheered me up. J.M. Hirsch writes a piece called "Meatless burgers that don't mimic meat," in which he provides a recipe for Miso Chickpea Sliders. Hooray! I disapprove of non-meat things trying to be meat, and Hirsch feels the same: "Thing is, if I want the flavor and texture of meat, I'll do something crazy. Like eat meat." Well, I won't. But I will attempt to cook these falafel-inspired sliders at some point.

Another recipe I'm definitely going to try is for Vegan Cheese Grits. According to the author of the piece, Ellen Kanner, Daiya is a vegan cheese that "tastes like the real thing." I disagree - there's just no way something that is dairy-, lactose-, casein-, gluten-, soy-, preservative-, and cholesterol-free can compare to something that got pumped out of a cow's udder. But I'm going to try this recipe anyway, since I have a lot of Daiya fake cheese left over from my experiment with the Libido Burrito, and it's not like I'm going to snack on it by the handful.

Finally, there's a piece called "Oh! Soy Good!" by Niesha Lofing, but I didn't get past the title. Is it supposed to be a twist on "Oh! So Good!"? As in, "Oh! This food I made with soy is so yummy!"? Or is it supposed to be Spanish for "Oh! I'm Good!"? As in, "Oh! I'm doing well, thank you, since I became a Spanish vegan!"? I was too baffled to keep reading, but I bet it's just a piece about how tofu doesn't really taste like brains.
Posted by Unknown at 1:01 PM