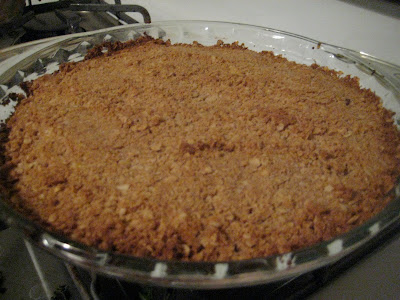 Back when my sister and I thought we were badass enough to be raw foodists for two weeks, we went grocery shopping with raw recipes in mind. We wanted to make some kind of raw date concoction that required a blender, and since we only discovered that we were blender-less after having purchased a 2-pound container of dates, well, we had a lot of dates and nothing to use them for.

I’d had enough bad dates in my life to know that I didn’t want a whole tub of them hanging out in my cupboard, so I needed to find a way to take advantage of them all at once. The fruit, not men! Get your mind out of the gutter.

Anyway. The other night, I had a date with Sasha. I cooked her dinner – we ate on the floor because I still don’t have any chairs – and we indulged in strawberries and vegan chocolate while we drank red wine.

Then we decided to take it to the next level and get something baking in the oven. I found some ideas for a date pie online, but we had to alter the recipes slightly due to my general lack of ingredients. This first date experience was not off to a good start.

I’d never used dates in cooking before. In fact, I don’t think I’d had a date at all until I moved to California after college. I was a date virgin. And this was my first date pie.

Here’s what we used:

We preheated the oven to 375 degrees. While things were heating up in there, we stirred the filling ingredients together in a big skillet and brought them to a boil. Then we reduced the heat to a simmer – we wanted to take things slow, after all – and stirred them up some more until they were smooth(ish):

While Sasha dealt with the mushy dates, I prepared the crust mixture in a big bowl. As it turned out, we had a lot of dates. And a lot of crust.

It was too much pie for one pan. So we made two pies: one for the two of us to share and one for me to give to my landlady to get back on her good side after drunkenly falling into (and partially destroying) her rose bushes last weekend. 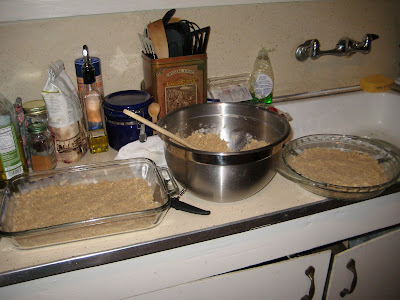 We packed a layer of the crust mixture into the bottom of each pan and plopped the hot dates down on top of it. Then we poured the rest of the crust on the top, patted it down evenly, and shoved the pies in the oven.

After 25 minutes of baking, the date pies were ready. The crust had turned golden brown and the whole cottage smelled delicious.

We waited about 10 minutes for our pie to cool and then dug in. It tasted so good, there was no time for awkward conversation. And frankly, that’s the best first date experience I’ve ever had. 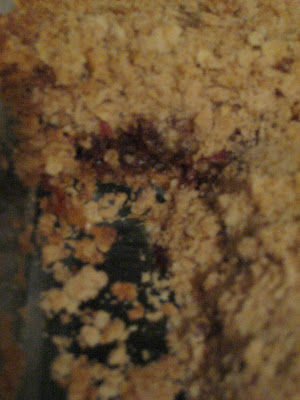