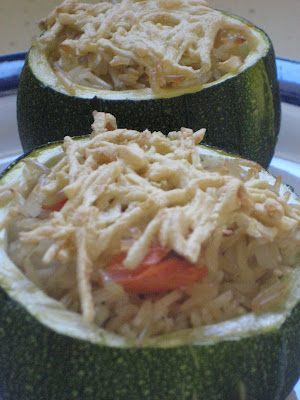 Now you seem them... now you don't because they're in my tummy.

At the farmers market on Tuesday, I came across the most adorable zucchini. They weren’t long like most zucchini; they were short and stout. Little teapot zucchini.

Don’t be thrown by my use of the plural “zucchini.” In Italian, the singular is “zucchino” and changing the “o” to an “i” makes it plural. I’m a stickler for grammar, even in other languages, so much so that I once made a scene when I ordered “canoli” off a dessert menu and the waiter brought me only one canolo.

Okay, I never did that. But I totally would, if there were such a thing as a vegan canolo for me to order in the first place.

Anyway, I bought two zucchini from the farmers market in order to avoid the confusion. Look how cute they are together: 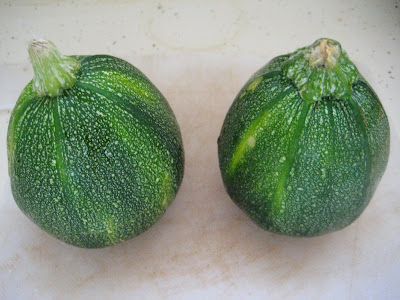 I decided to bake-stuff them both for linner (lunch+dinner; like brunch but in the afternoon). I’d never bake-stuffed anything before, so I was just making it up as I went along. Here’s what I ended up doing:

While the oven pre-heated to 375, I cut off the tops of the zucchini and used a spoon to scoop out all the seeds, saving them to use in a stir fry another time. I tried to make the edges of the little zucchini bowls as uniformly thick as possible so they’d bake evenly.

Then I mixed the brown rice (I used basmati rice from Trader Joe’s), onion, and tomato together and spooned it into the empty zucchini bowls. I sprinkled Daiya cheese on top and drizzled olive oil over the whole thing.

I put the zucchini on some tin aluminum foil and baked them for 40 minutes. That turned out to be just the perfect amount of time; the zucchini baked all the way through and the Daiya cheese was a bit crispy on top. I think adding some seasonings to the rice mixture would have made them more flavorful, but they tasted good plain. 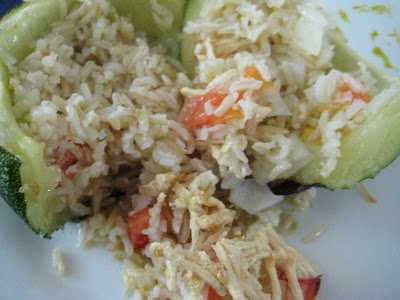 I decided to call them Houdini Zucchini because they disappeared immediately from my plate. Also because it rhymes.

The problem is, you can’t make just one Houdini Zucchini. That would be a singular Houdino Zucchino, and nobody would get the joke.
Posted by Unknown at 6:56 PM