It's Hard to Find a (Vegan) Friend

Over the past months, I’ve become involved with Go Vegan Santa Barbara. Its founder, Carrie LeBlanc, is an activist who manages to be convincing without being annoying to non-vegans. She uses Meetup.com to organize events for vegan-curious people and vegans who need vegan friends.

I fall into the latter category: I need some vegan friends. Despite many attempts to convince myself otherwise, I have to admit that Twitter followers don’t count as friends. And don't even get me started on Facebook "friends" (just because I clicked on "accept" when I was bored one afternoon, doesn't mean I want to be bombarded with your angst in the form of song-lyric status updates).

It’s not that I don’t love my non-vegan friends. We’re not dinosaurs, after all; omnivores and herbivores can totally play together without one party (um… the herbivore) getting eaten up by the other.

But it would be nice to have some people with whom I could prepare a meal or go out to eat without feeling like I’m limiting their options because I’m a vegan. We could just assume that whatever we prepared/ordered would be vegan and I wouldn’t have that lingering sense that I’m coming off as some combination of snobbish and unreasonable.

Obviously, making friends as a grown up is hard. But making vegan friends is pretty near impossible; I can’t just go around asking people first if they’re vegan and second if they want to be my friend. Unfortunately, there is no vegan equivalent of “gaydar,” as far as I know… “vegan-dar”? Lame.

So yesterday, I went to the Go Vegan SB Summer Salad Potluck event with the hope of meeting some non-annoying vegans to be friends with. It was hosted by Marq (who is obviously awesome because he spells his name with a Q) and his partner Tom (who, despite his less exciting name, is equally awesome).

I brought a rather uninspired quinoa salad with olive oil and every random vegetable I had in my refrigerator mixed in. It tasted good because the vegetables were fresh, but it looked pretty boring next to some of the really inventive dishes other people brought: 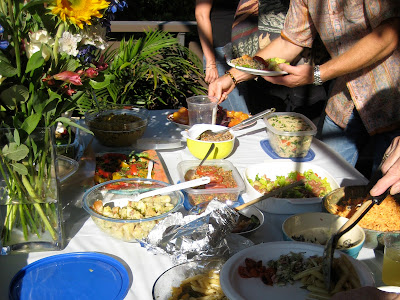 As it turns out, vegans love salad. Did I just blow your mind? Well, it’s true.

Luckily for me, all these salad-loving vegans were pretty friendly. I think if I keep attending these meet-ups, I might get some real friendships out of them – at the very least, I’ll get some more delicious food.
Posted by Unknown at 1:50 PM