On Saturday afternoon, I came home to find Erin and her boyfriend, Tyler, furiously chopping vegetables in the kitchen. We were all going to see Tower of Power perform later that night, so obviously I wanted to get in on their dinner plans (especially since my dinner plans had involved peanut butter toast and... nothing else).

They explained that they were going to make "raclette" for dinner. I had no idea what that meant, so I decided to go buy a bottle of wine.

When I got back, they took a break from vegetable chopping long enough to explain to me what this dinner would entail. Apparently, raclette is a Swiss/French dish usually centering on a kind of semi-firm, cow’s milk cheese of the same name.

But Erin and Tyler weren’t able to find the special raclette cheese (I guess the Ralph’s nearby isn’t fancy enough to carry it), so they had to settle for Fontina. Obviously, that didn’t matter to me, since I was rocking melted Daiya mozzarella-style shreds anyway.

The raclette set includes a platform that heats up (you grill the vegetables on it), and little dishes with handles for slices of baguette (you slide them under the platform to toast).

The grill spins, so if you're unlucky enough to get the heel of the baguette, you can always spin the grill around and steal someone else’s. Or if you see someone grilling a piece of delicious-looking garlic that you want for yourself, you can give the raclette a spin and snag it.

It’s like Russian roulette, but with vegetables instead of bullets. 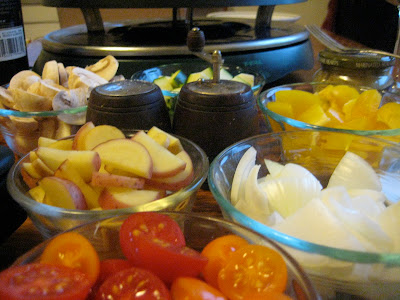 The whole experience is really fun and social. You pick out the vegetables you want to grill and when they’re ready, you slide out your (now toasted) baguette and pile them all on top to eat. Here's Erin in her adorable apron, tossing some mushrooms on the grill: 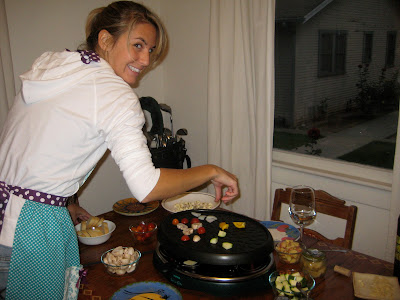 My parents told me they used to own a raclette set when they were young(er) and hip(pies). Unfortunately, Erin’s raclette set belongs to her parents, and she has to give it back.

But I guess it’s for the best. I survived Russian raclette once, but I wouldn't want to push my luck.
Posted by Unknown at 10:00 PM