A couple of weeks ago, my friend Lauren sent me a link to the New York Times’ Essential Summer Dishes. She pointed out that a lot of the recipes were vegan (or easily veganized by omitting cheese or substituting a sauce or something).

I wasn’t feeling inspired to go through the veganization process, so I went with one of the already-vegan recipes: the hemp horchata, submitted by Coco Harris of the fabulous blog Opera Girl Cooks:
Coco happens to be a friend of a friend (that friend being Sasha, with whom I recently baked my first date pie), and I’d tried and enjoyed her recipes before.

Horchata is a chilled Mexican drink, usually made with rice. Well, this hippie version is made with hemp instead. I’d never purchased or ingested hemp before; my only interactions with it had involved braiding or otherwise twisting it into necklaces during summer camp as a preteen.

But apparently, you can eat hemp. I bought hulled hemp seeds at the Isla Vista Coop and, ignoring their rancid pungent smell, got to work on my horchata.

But in my endeavor to recreate this hemp horchata, I encountered two problems: first, I didn’t have an immersion blender. Or any blender, for that matter. All I had was a food processor, so that would have to do.

My second problem was of the epic/tragic variety: hubris. In case you weren't a Classics major, hubris means over-weening pride, and it’s always the fatal flaw of protagonists who otherwise have pretty much everything working in their favor. Basically, these characters start dominating in life, get too arrogant, and then everything hits the fan.

Well, in the tragic episode that was my attempt at getting creative with this horchata, hubris was my downfall. “I am a creative cook!” I thought to myself. “I will add coconut shreds to this recipe and it will turn out great because things have really been going my way lately.”

So here’s what I threw into the food processor:

After it was all food-processed up, I put it in a plastic container and stored it in the fridge until my friends came over. Then I could share my horchata with them and show off how creative I had been.

So when Shannon and Katie visited last night to celebrate my roommate Erin’s birthday, I pulled the hemp horchata out of the fridge and examined it. The agave nectar had sunk to the bottom and the whole thing looked like… well, it looked like off-white, cloudy water with specks floating in it: 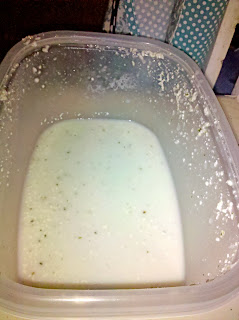 I mixed it up by shaking it, then poured one glass for us all to share because I was not delusional enough to think that each of us was going to be able to drink an entire glass of this stuff.

The thing is, it tasted good. The one problem was the hubris-inspired ingredient: those coconut shreds. They had not been pulverized by the food processor, so they got caught in our teeth as we drank. And the ones that did not get caught in our teeth gathered at the top of the glass like a pile of soggy toilet paper:

I had been thwarted by hubris! But unlike that of a hubristic literary protagonist, my life is not a tragedy. Given the evidence, I’m pretty sure it’s a comedy.

And that means I get to learn my lesson – don’t add coconut shreds to a perfectly good drink recipe! – and move on to make more mistakes. The story of my life.
Posted by Unknown at 4:01 PM