So when my friend Matteo – an Italian man – offered to cook me dinner, I was thrilled at the chance to vindicate my female relatives. I told him that my plan was to sit out in the living room and watch TV (well, watch Hulu on my computer) while he worked hard in the hot kitchen.

He became annoyed and told me that real Italians don’t live like that anymore; it’s just the old-school Italian-American families, like my mom’s, that keep the stereotype alive. I asked him if he would at least yell, “Mangia! Mangia!” at me when he was done. He rolled his eyes and didn’t justify my request with an answer.

I ended up not relaxing in the living room while he cooked. Instead, I hovered around him drinking wine, asking questions, taking pictures of what he was doing, and generally getting in the way. Here’s what he made for me: 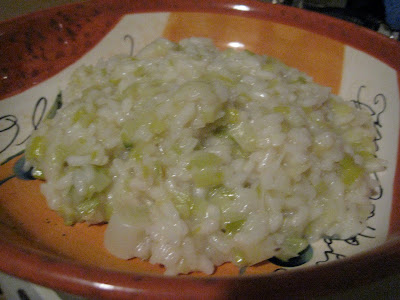 He boiled a whole pot of water and threw in the ends of the leeks, a zucchini (or as Matteo obviously called it, a single “zucchino”), an onion cut in half, and a handful of kale. We let it simmer for 20 minutes: 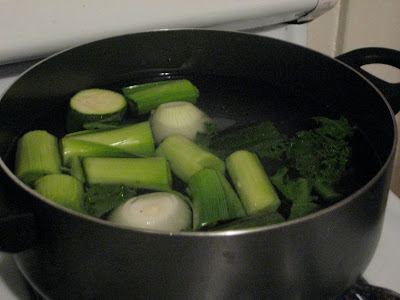 While the broth was broth-ifying, Matteo chopped the leeks into very thin slices. He put the Earth Balance into the middle of a big wok and poured the risotto and leeks on top of it in a pile: 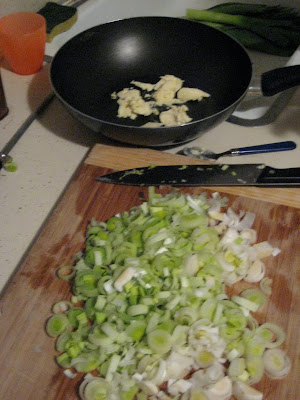 Then he spooned a few ladles of broth on top and stirred it up with a wooden spoon over low-medium heat. The trick, I guess, is to never stop stirring. As soon as the risotto starts to get sticky and clumpy, you add another few ladles of the broth. After about a half hour, the risotto had expanded to its fullest potential.

We sprinkled some Daiya mozzarella shreds on top and ate it with what was left of the white wine. It was perfect. And the best part is that the leftovers tasted even better the next day, since the flavors had had some time to mingle with each other in the fridge.

This man-made risotto definitely beat any woman-made risotto I could have cooked up. But I’m glad I watched closely and took detailed notes because it tasted just as good as any buttery, cheesy version. And I doubt you could get vegan risotto it in Italy, so... Italian-Americans win.
Posted by Unknown at 3:36 PM