Happy Labor Day! I was singing in a wedding in Pasadena this past Saturday, so I spent the weekend with my friend Avery in LA. She’s a painfully attractive omnivore with an open mind, so we got to check out a bunch of vegan and vegan-friendly eateries in the West Hollywood and Hollywood areas.

When Avery suggested we eat dinner at Vegan Glory, I couldn’t decide whether its name implied a vegan deity or some kind of war victory for vegans. Either way, I was into it.

They serve mostly Thai food but the menu is huge and varied. It’s also wonderfully inexpensive. I got the tacos with “chicken” and the “freshy rolls” (thai spaghetti, soy chicken, lettuce, bean sprouts, and herbs, wrapped in rice paper and served with hoisin sauce) at our waitress’s recommendation.

If a head of lettuce and a fake chicken had a baby and it was still in an embryonic sac… and then I ate it… that would be a freshy roll: 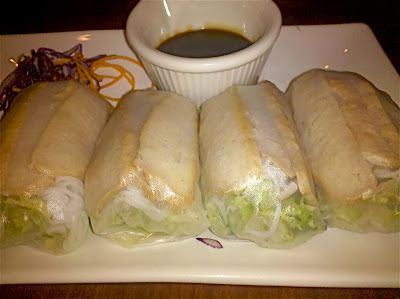 The tacos were cold, which struck me as strange, but somehow it didn’t take away from their deliciousness. I guess cold fake meat is just nowhere near as gross as cold real meat.

For brunch on Saturday, we took advantage of a Groupon I had purchased a couple months ago for Café Muse, a mostly vegetarian place with an attached art gallery and a guitar and piano for patrons to use. I like the whole "muse" theme, but I was more inspired by my vegan banana pancakes with fake butter and real maple syrup (obviously). I expected the banana to come on the side, but it was, impressively, baked into the pancakes themselves: 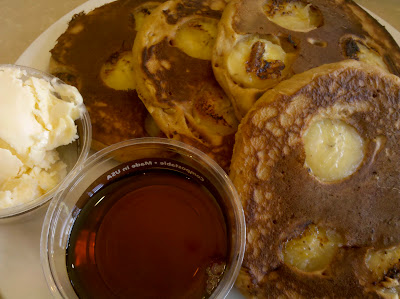 Avery ordered a tuna melt with sweet potato fries and for some reason, the sweet potato fries took forever to come out. When they did arrive, they tasted great, but we were already done eating everything else. As an apology, our waiter brought out a free piece of vegan cheesecake: 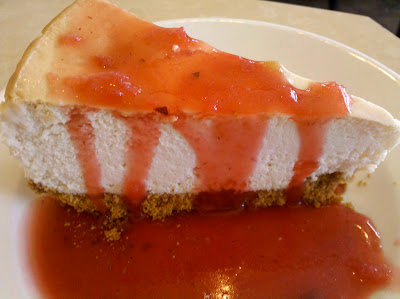 I thought it was perfect; it was as close to real cheesecake as a vegan cheesecake can get. It definitely beats the cheesecake at Café Gratitude. Oh, Groupon. You never let me down.

When I got back to West Hollywood after the wedding I performed in, all Avery wanted to do was get drunk and go dancing. But I convinced her to take me to dinner first. We walked over to Hedley’s, a cozy, family-owned restaurant with a seasonal menu that rotates weekly.

The one downside to Hedley’s is that to get to the bathroom, you have to go outside and walk around the building. Avery and I were both wearing what we endearingly termed “hooker heels,” so after a few beers the dark walk to the bathroom was particularly treacherous.

Hedley’s is not strictly vegan but is definitely vegan-friendly, and our waiter was helpful and ridiculously patient with my questions. I ended up ordering the “burrito in a bowl” with black beans, brown rice, lettuce, guacamole, and tofu: 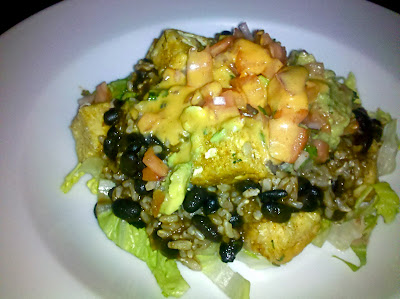 The tofu was grilled so evenly that I felt a bit ashamed of my own lack of tofu grilling skills. The best part about Hedley's besides the food was that even though it has a pretty swanky vibe, when the bill came I didn't want to kill myself. I paid the perfect amount for the perfect amount of perfectly grilled tofu.

We stumbled upon M Café (stumbled because we were still wearing those darned hooker heels) while pretending to shop at fancy stores in Beverly Hills today. I’d become exhausted from calculating in my head how financially inferior I was to our fellow shoppers (the ones whose shopping involved the key component of purchasing) and I needed something to eat.

M Café immediately appealed to me because it smelled like cucumbers inside. Beyond that, everything on their menu is vegan except for a few sushi rolls and fish salads. Our server, Chase, was friendly, informative, and had no qualms letting Avery try samples of every salad in their display case.

I decided to try the shiitake-avocado sushi rolls because I’d never had sushi with mushroom involved before. It worked: 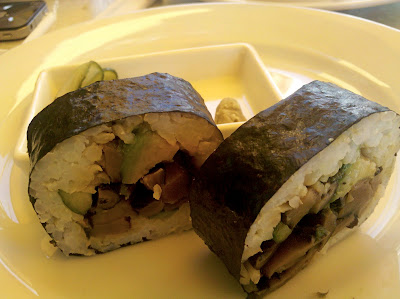 Next to the salads, there was a display case full of vegan desserts. Chase told me his favorite was the strawberry shortcake, and I had really come to trust Chase’s opinion over the few minutes we’d known each other. So I ordered it and Avery helped me devour it. Avery said that from an omnivore’s perspective, this strawberry shortcake was just as good as any creamy/eggy alternative: 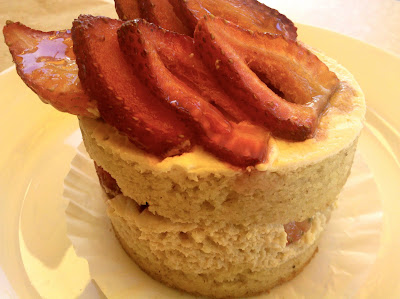 It was made with soy buttercream, “tofu whip” (almond, apple cider vinegar, maple sugar, beet sugar, canola oil, lemon juice, and tofu), and a bunch of obvious ingredients like strawberries.

It was a satisfying weekend of vegan dining out, and part of me wishes I lived in LA so I could check out vegan-friendly restaurants more often. But I'll have to settle for swearing to return to these restaurants when I’m visiting LA again. And this time I won’t wear hooker heels.
Posted by Unknown at 8:30 PM