Spiritland: Not a Haunted Amusement Park

As far as I know, there are three upscale-ish restaurants in Santa Barbara where vegans can find as many things to eat on the menu as everybody else. Of course there are a bunch of places that will happily make substitutions to non-vegan dishes, but only Adama, Sojourner Café, and Spiritland Bistro have little symbols on their menus denoting the many vegan options.

I think the name “Spiritland” is meant to imply that eating there helps get you in touch with your spirit, if that's what you're into. After all, their food is totally free of hormones, nitrates, genetically modified organisms, irradiation, and even artificial colors and flavors – and I can see how it would be difficult to get in touch with your spirit with all that nonsense in the way.

But for me, the name “Spiritland” conjures up the image of one of those tacky, over-priced amusement parks I used to beg my parents to take me to when I was in a particularly annoying mood as a child. There would be billboards announcing your approach to it on the highway – “Spiritland, 67 miles!” – and when you got there, it would be nothing but a haunted house and maybe a hayride in the middle of a deserted parking lot.

Disappointingly, Spiritland Bistro is not haunted. But it is about as far as you can get from a tacky amusement park. Its atmosphere is a comfortable blend of cozy and elegant and all of its dishes are made with local, usually organic ingredients.

The other night I walked over to Spiritland with Alex, a devastatingly attractive omnivore-nerd with no discomfort about vegan food because as he says, he will eat anything, vegan food included.

Our waitress wasn’t particularly spirited, and I definitely preferred her peaceful demeanor to the in-your-face approach of some other servers I’ve encountered. She recommended the Caribbean Sweet Potato Balls as an appetizer with a note of warning that, “they’re deep-fried, so they’re not that healthy…”

We were sold. There were four of them in a little pile and they were served with a coconut dipping sauce. They were difficult to eat because I kept wanting to stop and discuss how absolutely delicious they were.

The Greek Moussaka I ordered for dinner is up there in the top five things I’ve ever tasted. It’s made of layered eggplant, potatoes, ground soy and tomatoes, and it’s served in the most incredible sauce: a combination of marinara, balsamic reduction, and some kind of creamy mushroom concoction: 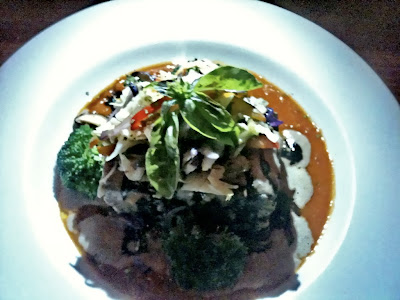 The hunk of moussaka was so huge that even with Alex’s help, I couldn’t finish it, so I got it wrapped up to go. And even though Spiritland isn’t home to any ghosts (as far as I know), I am haunted with regret (!) because I forgot the rest of the moussaka in my to-go box on the table.
Posted by Unknown at 3:13 PM