My mom loves library sales. Especially the kind where you pay a few dollars for a big paper bag that you can fill up with as many books as you can carry home with you. She's a very thoughtful lady, so she always fills her bag with books (and VHS tapes) she thinks we'll be interested in. Recently, she gave me a book called The Los Angeles Times California Cookbook (of course, because I live in California), which she picked up at a library sale in my hometown in Massachusetts. The cookbook includes recipes that "illustrate the California style, with its outdoor life, accent on fitness and good nutrition, fresh garden produce, and tropical foods."

As of last night, I had yet to crack open the Calfornia Cookbook, but - having identified myself as a California stereotype from 1981 - I felt obliged to check it out further. And it was time to get some inspiration about what to do with the rest of my pile of lentils. Yup, they were still in my fridge, despite my dedication to eating at least a serving of lentils per day for the past week or so. It was time to get rid of them once and for all.

So I decided to try to make lentil burgers. Here's the recipe from The Los Angeles Times California Cookbook:

Well, there would be a few steps to veganizing this recipe. First of all, Worcestershire sauce has anchovies in it, so I can't eat that. I decided to substitute soy sauce because, well, it's soy. Second, the eggs! Eesh. I was skeptical of the powers of ground flax seed after getting macarooned the night before, but I didn't have another option. I decided to substitute flax seed for the wheat germ, too, since I just didn't have any wheat germ lying around.

Nor did I have any bread crumbs, but of course I had whole wheat bread (what else would I use to make my peanut butter toast every day?), so I just crumbled that up and called it breadcrumbs. After everything was mixed together, I packed it into little slider-sized patties (smaller than the recipe indicates) like this: 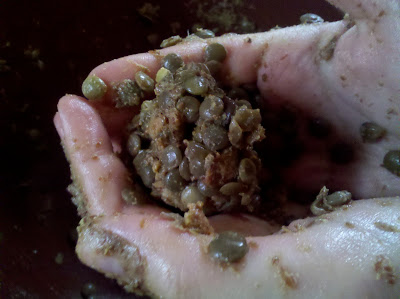 The good part about having the job of patty-packing was that my hands were covered in lentil goop, so I could ask Amy to do everything else that had to be done (mix up a yummy Tahini sauce, toast the pita pockets, wash the dishes, etc.). The little patties stuck together surprisingly well, because I made them more round than flat. Here they are sizzling up: 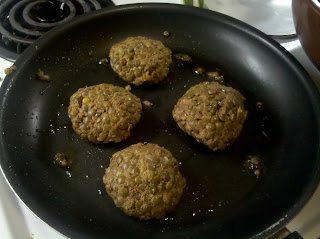 And here's the final product, stuffed in a pita (pre-Tahini sauce): 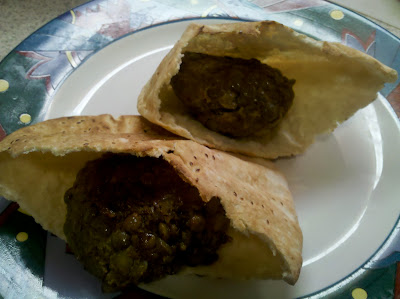 This was the most successful vegan cooking night I've had so far. The lentil burgers are delicious (thanks, California Cookbook!) and as a plus, I got to use up the rest of those silly lentils.
Published with Blogger-droid v1.6.8
Posted by Unknown at 6:49 PM