Last night I wanted to bake something sweet. Quite conveniently, I had some random fruit in my kitchen that was ripe and would go bad if I didn't eat it quickly. I had three bananas and a bunch of pineapple slices left over from the Über Smüthie, and a bag of shredded coconut from... I don't know why I had that bag of shredded coconut.

Just to check, I searched online for all those ingredients + the word "vegan." I actually found something! Somewhere in the world, another woman looked in the kitchen and discovered that she had exactly the same random ingredients to use... and she is a vegan. And she knows how to bake (obviously, if I were on my own here, I would have made a pineapple-banana-coconut salad). That woman is Joy the Baker, and she's not really a vegan (she says she likes bacon too much), but she provided me with this recipe: Coconut Pineapple Vegan Banana Bread.

I was into it. I also had some chocolate chips left over from my vegan chocolate chip cookies, so I decided to throw those into the mix. I happen to think that everything is better with chocolate chips. Except for pizza, maybe. And chicken. Luckily, I don't eat either of those things.

Here are the ingredients I was supposed to use:

I had three (kind of ripe) bananas, big slices of pineapple that I figured I could "crush" with a fork myself, and all the other ingredients except for the allspice. I followed Joy the Baker's directions (and tossed some chocolate chips into the batter) and felt pretty satisfied with myself.

But after the bread had been in the oven for 15 minutes, I realized I had made a mistake. Since I didn't have any whole wheat flour, I had planned on using 2 cups of all-purpose flour... but I hadn't. I had totally forgotten about that modification. So I had only used 1 cup of flour, or half the required amount. Argh! There was nothing to be done.

I let it bake for 38 minutes, then opened the oven door, afraid of what I might find (I was picturing a hot, wet puddle of fruit). 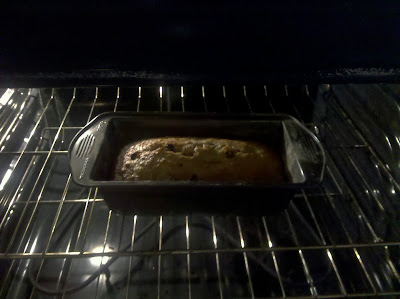 But it was perfect - the lack of flour didn't ruin it after all! It just meant that the bread was super moist and more like a dessert than a breakfast. I shared it with Emily, Amy, and our friend Jim who (conveniently) showed up at our apartment for an unannounced visit seconds before the oven timer went off. Here's what the bread looked like right before I ate the first slice: 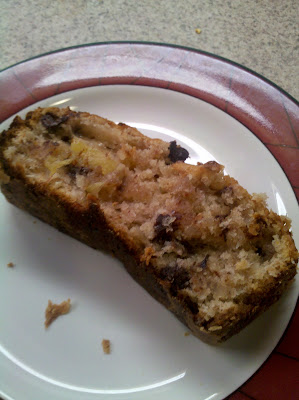 It is either Vegan Pineapple-Coconut-Banana-Chocolate Chip Bread (with not enough flour), or more simply: Everything Delicious Bread.
Posted by Unknown at 11:21 AM