A few days ago, I was checking out the list of different booths that were going to be set up at Santa Barbara's Earth Day Festival (I told you I love booths). The name of one of the food booths caught my eye: Strictly Vegan. Obviously, I was intrigued, and I decided to bop over to the Earth Day festivities today to try some of the food at Strictly Vegan for lunch. Strictly Vegan doesn't have a restaurant - they just set up and cook food at various festivals around southern California. According to their website, they also cater events and offer vegan cooking lessons.

I was a little hesitant about trying their food for a couple of reasons. First, they call themselves "Jamaican cuisine." I don't know that much about Jamaica, except that in fourth grade, one of my friends went there on a family vacation and came back with her hair in cornrows.

I've tried Jamaican food only once in my life, at Island Fresh Fish Market and Restaurant, a tiny place Andrew and I checked out a few months ago because we were feeling adventurous. I ordered grilled shrimp, but Andrew ended up eating most of my meal because it was too spicy.

The second reason I was hesitant about Strictly Vegan is because they use Gardein™ in most of their meals. I had never tried Gardein™(which gets its name from the clever combination of garden + protein), but I am not all that into the idea of fake meat in general. I didn't give up eating animals and animal products so I could replace them with a weird, synthetic substitute. Fake meat just creeps me out. I'm also pretty skeptical of companies that insist upon a ™ sign following their products' names in writing.

But vegan restaurant options in Santa Barbara are sparse, so I wanted to at least see what Strictly Vegan offered. There was a short line at the booth, with one person taking orders and handling money and three people cooking in back. I could see one of them mashing up what must have been the Gardein™ in a big bowl. It looked a lot like tofu. Here's what the booth looked like: 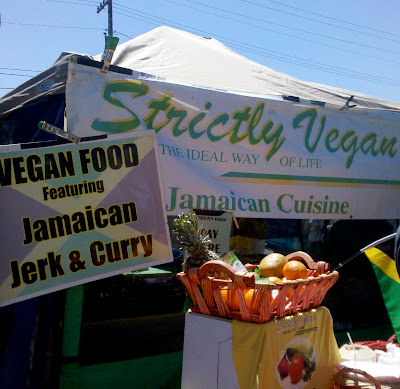 I decided to order a Reggae Wrap ($10) because I liked the sound of the name. In addition to the Gardein™ (which, in this case, is made to taste like chicken somehow and marinated in Jamaican jerk spices and ginger wine), the Reggae Wrap consists of organic baby greens, carrots, "tropical salsa," avocado, and homemade vegan ranch dressing, wrapped in a spinach tortilla: 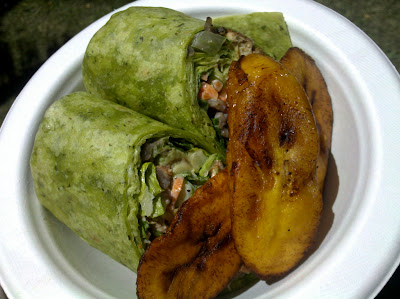 This meal really resembled the one I had at the GOOD LA launch last weekend, and it made me wonder if my festival eating options were always going to be limited to various vegetables stuffed into spinach wraps. The answer: probably. But there was one big bonus served with my Reggae Wrap from Strictly Vegan. Fried plantains!

I hadn't had fried plantains since my big sister Katie taught me how to make them in Ecuador almost two years ago. She was a volunteer for the Peace Corps, and I think nomming on fried plantains was the only thing that kept her sane way out in the middle of the Ecuador wilderness. Look how happy the fried plantains made her: 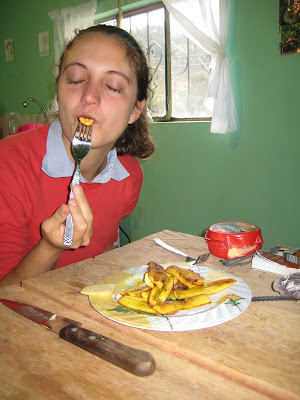 Fried plantains (unlike cornrows) are always a good idea.

The whole meal from Strictly Vegan was delicious, but it didn't taste vegan. I'm sure that's due to the fake chicken and fake Ranch dressing. This was my first experience with fake meat, and I guess it was a good one. But the fake meat was hidden inside a wrap; I think if I had to slice the fake meat and eat it with a fork, it might turn my stomach a little bit.

I wish I could have tried more of the food options at Strictly Vegan, but I'll just have to wait for another festival in Santa Barbara and hope they pop up there.
Posted by Unknown at 2:03 PM