One of my most scarring childhood memories involves imposter maple syrup. I had woken up to the sound of gentle rain and the smell of pancakes grilling. I flounced downstairs (I was one of those little girls who flounce everywhere) and sat at the kitchen table, ready to devour the delicious pancake breakfast my daddy was about to serve me.

I'm sorry to say, this story does not have a happy ending. It's been almost twenty years, and I still shudder when I think about the moment those pancakes touched my lips - they were drenched in fake maple syrup. We had run out of 100% pure Vermont maple syrup, and my parents had figured that high fructose corn syrup calling itself "breakfast syrup" and hiding behind the unfortunate stereotype of Aunt Jemima would be an acceptable substitute.

Ever since that rainy Saturday morning, I have been a syrup snob. It wasn't really an issue while I was growing up; the syrup drama never escalated beyond the fights I'd sometimes get into with my little brother (who, unbelievably, prefers fake maple syrup) that went something like, "Well, when I'm the president, I'm going to outlaw your type of maple syrup!"

Then I moved out to California and tried to order pancakes at restaurants. At first, I asked my server if I could please have some "real" maple syrup. That server responded by picking up the pitcher of fake syrup that was already on my table, pouring it on top of my pancakes (helpfully, he thought) and asking, "What do you mean, real? Look, there's real syrup in here. Do you not see it?"

After that disaster, I tried rephrasing my request. I asked my next server, "Is this 100% pure maple syrup?" She snorted and responded, "Well, it ain't cut with baby formula, if that's what you mean!"

So I just no longer order pancakes at restaurants. I rarely make them at home, either - except for the month following my birthday last year, when I made pancakes almost every day to eat with the 100% pure Vermont maple syrup my friend Saloni had mailed me from the east coast.

Last night, my roommate Amy sauntered into the living room (she was sauntering because she was trying on the new shoes she had ordered online that had just been delivered) and announced that she was going to toast some frozen blueberry waffles. The frozen blueberry waffles weren't vegan, so I had to turn them down, but the mention of waffles got me thinking about 100% pure maple syrup and how much I love it.

I decided to try making something that I could eat with maple syrup, so I looked up recipes online for vegan pancakes. I went with one of the first ones I found, because it got such great reviews: 5 Minute Vegan Pancakes. The recipe says to use:

I substituted coconut milk beverage (left over from the failed macaroons) for the soy milk and canola oil for the vegetable oil. The batter was much different from normal pancake batter. It was frothy and aerated, almost like Cool Whip in texture.

The pancakes looked just like regular pancakes, except fluffier. I served them (to myself - Amy was busy nomming on her frozen blueberry waffles and Emily wasn't hungry) with strawberries and, of course, 100% pure maple syrup. Here they are, right before I poured syrup all over them: 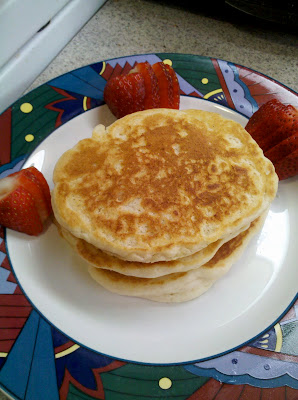 And here are Amy's lame frozen blueberry waffles, posing with the butter she was about to spread on them: 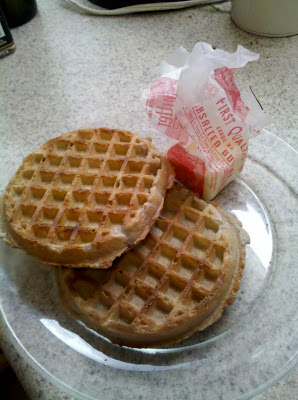 There was no contest. I'm sure it had to do with the canola oil I grilled them in, but my vegan pancakes were phenomenal. They were literally the best pancakes I have ever made. And I'm not one of those people who overuse the word "literally." I'm so glad I've found a vegan excuse to indulge my syrup snobbery.
Posted by Unknown at 10:13 PM