The title of this post is not intended to be a factual statement. (The above photograph isn't actually Jon Kyl, either.)

A few days ago, I had never heard of Senator Jon Kyl, a Republican from Arizona. In the debates leading up to the almost-but-not-quite government shutdown last week, Jon Kyl made the following statement about Planned Parenthood (whose funding was on the chopping block):

He claims that abortions constitute "well over 90% of what Planned Parenthood does." He was just slightly off; according to Planned Parenthood's 2009 Annual Report, abortions in fact make up only 3% of its services. But politicians lie all the time. The real shocker came when, confronted about this blatant lie, Kyl's staffers explained that, "His remark was not intended to be a factual statement, but rather to illustrate that Planned Parenthood, an organization that receives millions of dollars in taxpayer funding, does subsidize abortions."
Ah, I see. It wasn't intended as a factual statement. So no need for an apology.
In response to this bogus response to a bogus statement (which, of course, is now permanently part of the Congressional record), Stephen Colbert began incessantly tweeting things about Jon Kyl. He can say whatever he wants, as long as he follows it with the hash tag #NotIntendedToBeAFactualStatement. The idea caught on after he explained it on his show on Monday night, and since then there have been some clever contributions.
Some of my favorites from Colbert's writers:
Jon Kyl can unhinge his jaw like a python to swallow small rodents whole. #NotIntendedToBeAFactualStatement
Jon Kyl murdered a caricaturist for drawing him with a basketball instead of a surfboard. #NotIntendedToBeAFactualStatement
Jon Kyl is one of Gaddafi's sexy female ninja guards. #NotIntendedToBeAFactualStatement
And the most fitting viewer contribution, given my recent break up:
Jon Kyl is anti-bacon. #NotIntendedToBeAFactualStatement - Mathew Davoli
Anti-bacon? I guess that's something I (do not actually) have in common with Jon Kyl.
I wanted to make a contribution to the fun hash tagging, but how? I had no ideas. Then I remembered my friend Katie's T-shirt, which she wore last night in my honor: 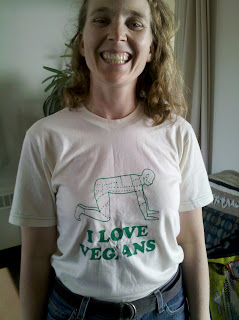 At first, I thought it was a nice, supportive message. Then I realized that the man is in a bovine position, with dotted lines crisscrossing his body as if to indicate different cuts of meat. Katie (yes, the same Katie with the uncanny knowledge of bees) meant to say that she has love for vegans in the same way she has love for bacon.
And she does (not actually) have that in common with Senator Jon Kyl.
Posted by Unknown at 12:34 PM