I believe "macaroon" should be a verb. It's such a fun word! It could mean doing anything that has to do with coconut or any other kind of macaroon (if other kinds exist). But it sounds best when it implies some kind of duping.

For instance: last weekend at a party in Venice beach, I got macarooned. A woman was sitting at a little table with a plate of delicious-looking coconut macaroons on it. She was energetically (borderline maniacally) offering them to everyone who walked by, and I was no exception. Our conversation went like this:

The lady was right - the macaroons were the best ever. But out of curiosity the next morning, I Googled macaroon recipes and discovered that macaroons are not, in fact, inherently vegan. In fact, most macaroon recipes call for egg whites and milk. I was macarooned!

I imagined shaking my fist in the air and yelling, "Macarooned!" It felt good.

Last night I decided to try to make my own macaroons, so I would know they were vegan. I started with this recipe from Savvy Vegetarian.

The problem was: math. I didn't have any Ener G-Egg Replacer, this nonsense ingredient that almost every recipe I try to make calls for. I wanted to use ground flax seed as an egg replacer instead. The recipe calls for 2 Tbsp Ener G-Egg stuff, and I know that 1 egg = 1/2 Tbsp. So the recipe calls for the equivalent of 4 eggs. Then I looked at my bag of ground flax seed and made the calculation based on 4 eggs... but I have a feeling I used too much flax seed/water mixture. Here's what the batter looked like: 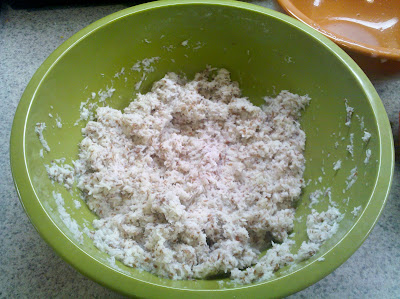 The reason I think my math was off is because the macaroons took way too long to bake. The recipe said 20-25 minutes, but after 25 minutes they still looked exactly the same as when I put them in - not browned at all: 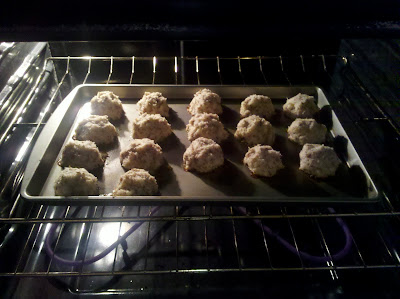 I waited a total of another 15 minutes (my oven is weak), and then just took them out, even though they still looked too moist, because I was bored of waiting for them. Here's what they looked like: 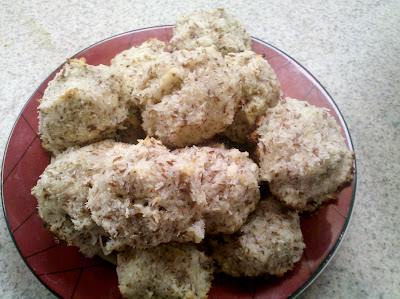 Well, they were cooked enough, I guess. They just aren't that good. It's not that they taste unpleasant, they're just not the right consistency nor are they sweet enough. My roommate Amy likes them, so she can eat them all as far as I'm concerned. This is a recipe in which a flax seed substitution does not work so well, unfortunately. Macarooned again!
Posted by Unknown at 11:45 AM