"Well," said Pooh, "What I like best..." and then he had to stop and think. Because although eating honey was a very good thing to do, there was a moment just before you began to eat it which was better than when you were, but he didn't know what it was called. 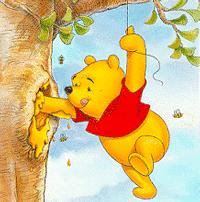 About once a week, my friend Erin has me and two of our other friends over so she can cook for us. She does this because she likes to cook, but also because she likes us. We hadn't gotten together since I decided to be a vegan, and I was a little nervous about how my food choices would affect the dinner and the mood of the group. I didn't want Erin to feel obligated to cook a vegan-friendly meal, but I also didn't want to make her feel awkward by not eating what she did cook.

As it turned out, Erin is an even better friend than I thought, and she prepared a yummy meal I could enjoy with everyone else. She made angel hair pasta with asparagus, two kinds of potatoes roasted with onions, and green beans, all cooked in black truffle oil.

Erin told me that during her extensive online research, she found some evidence that many vegans don't eat truffle oil, since truffles are sniffed out by pigs. I guess those vegans don't like the idea of eating food for whose production animals had to do any work. But that's a slippery slope: would those vegans be against animal labor in the harvesting of vegetables? It seems to me that pigs probably like sniffing out truffles - that's about as good as life gets for a pig.

Besides, black truffle oil is an aphrodisiac. Truffle-sniffing pigs know what's up.

Anyway, for an hors d'oeuvres, Erin had mixed up some olive oil with tomatoes, cucumbers, bulgur, parsley, and sweet onions, and we ate it wrapped in lettuce: 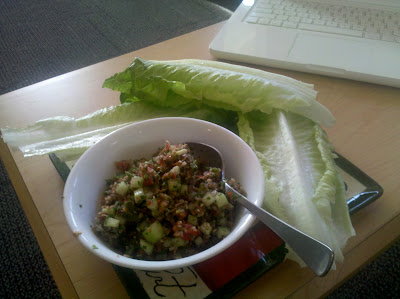 Here she is, being a skilled chef: 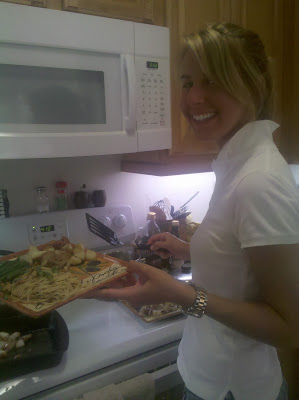 And here's the main course: 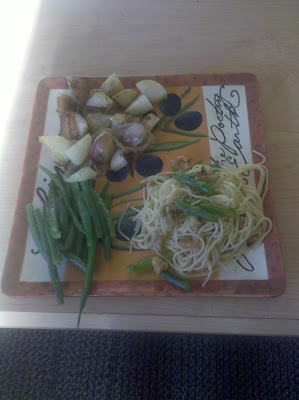 But the existential crisis of the evening had to do with the alcoholic accompaniment to that delicious meal. Our friend Katie brought over some honey mead to share. Then she realized that, as a vegan, I was not going to drink her honey mead (despite the aphrodisiacal black truffle oil). So she launched into an explanation of why bees making honey is not the same at all as animals being tortured in factory farms. I was enthralled (and, frankly, shocked at the breadth of Katie's knowledge about bees). She argued that bees make honey whether we eat it or not, as an emergency backup plan in case they are ever in a situation without food. Sure, we steal their honey, but they're not injured in the process and they just make more. After all, according to Winnie the Pooh (who is the wisest animal I know):
"That buzzing noise means something.
If there's a buzzing noise, somebody's making a buzzing-noise, and the only reason for making a buzzing noise that I know of is because you're a bee...
And the only reason for being a bee that I know of is making honey...
And the only reason for making honey is so as I can eat it."
Of course, there are many arguments against the consumption of honey by vegans, too. Some of those arguments make sense, and some involve the idea of bee slaves. Definitions of exactly what veganism is vary (arguably by person), so it makes sense that there are conflicting stances on the honey issue.
I tried a sip of the honey mead, but I've decided to continue substituting agave syrup for honey whenever possible. There are lots of arguments for and against all aspects of veganism, and if I'm going to go vegan, I might as well go "whole hog," so to speak.
Otherwise everything will get too complicated. After all, Pooh also said, "It is more fun to talk with someone who doesn't use long, difficult words but rather short, easy words like, 'What about lunch?'"
Posted by Unknown at 1:54 PM