This horrifying video was brought to my attention a few days ago:

Epic Meal Time is, apparently, a group of quasi-bros who cook the nastiest, meatiest things they can think of, eat them in the most disgusting way possible, then edit the footage to make it look "epic." In this episode, they make "inside-out shepherd's pie," then fashion it into two cars (each with 1,119 grams of fat and 23,266 calories) and try to make the cars roll. That part is kind of funny.

The only thing I approve of in this video is the guy's shirt that says, "Drunk off pancakes." I can get behind that. But if you couldn't watch it all the way to the end, I don't blame you.
Watch this instead! It's the vegan parody of/response to the previous video, and it is way funnier. Probably because "vegan" and "epic" don't usually go together.


They're making a Christmas Tofurkey: Soy to the World! My favorite part is when they combine a bag of black beans and a bottle of iron pills using a mortar and pestle. Oh, and the peanut butter glaaaaaze after it comes out of the oven.

I was inspired. I wanted to have Epic Meal Time! I went into the kitchen and took out all the ingredients I had to work with. I would crush them all up and smother them in each other, then dump incongruous ingredients on top of them and stuff the whole mess in my mouth.

Then I realized that I didn't really want to ruin my dinner by smothering it in peanut butter and soy sauce. I also didn't want to waste food.

So I would have to settle for a considerably less epic meal time; the epicness would come from my excitement about it. Here's what I started with: 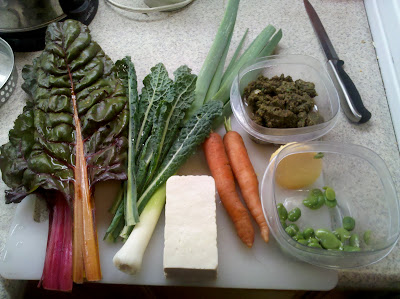 First I put the CARROTS! in my wok with some OLIVE OIL! Then I added the KALE! because it often takes a long time to get soft. I chopped up the RAINBOW CHARD! and threw that in with the mix, making it so colorful. I noticed that Emily had saved me some FAVA BEANS! so I added those, too, right after the GREEN ONIONS! I didn't even cry while chopping the onions! 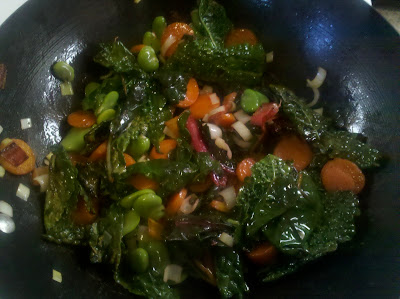 Look at all those COLORS! Meanwhile, I was grilling up some EXTRA FIRM TOFU! in a pan with some POLENTA! that was lying around. Here they are, together! What a crazy combination. 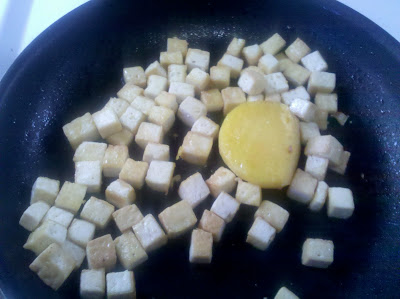 I didn't even pay attention to the tofu, so it BROWNED all UNEVENLY!

But that's not all. I also had a whole lot of LEFTOVER MUSHROOM STUFFING! from when I made Stellar Stuffed 'Shrooms, so I spooned some of that out and put it on top. That stuffing includes SPINACH! BREAD! GARLIC! and MORE ONIONS! and it was cold so I also got a mind-blowing combination of temperatures!

Then I remembered that I had forgotten to take my PILLS this morning! So I just balanced those on top of the leftover mushroom stuffing. CALCIUM! B-12! and a MULTI-VITAMIN full of who knows what! 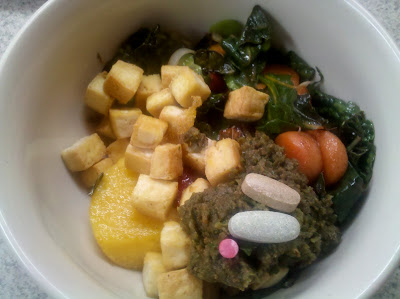 Then I ate it all really quickly.