A wise woman named Shirley Conran once said, "Life is too short to stuff a mushroom." I couldn't agree less.

Our friend Micah was coming to Tigh Vino for dinner, and I wanted to contribute to the meal. I decided to crack open The 30 Minute Vegan, a cookbook my friend Saloni had mailed me for my birthday (my birthday isn't until the 28th, but I have the self control of a Mexican jumping bean so I opened her present as soon as it arrived).

The 30 Minute Vegan is by Mark Reinfeld and Jennifer Murray, and it includes "over 175 quick, delicious, and healthy recipes for everyday cooking." I immediately liked it. I wanted to be a 30 minute vegan! So I got started.

Perusing the recipes in The 30 Minute Vegan made me excited, but it also made me kind of embarrassed. Most of the recipes require fancy things that I don't own, like spirulina, nutritional yeast, and something called mung spouts. I didn't really have any interest in finding out what mung spouts were (just saying "mung spouts" aloud makes me want to never eat food again), but things like cumin, basil leaves, and coconut oil seem like must-haves.

Saloni is one of those people who has a special sense about seasonings and spices when she cooks, like Ratatouille. I hope I can convince her to come out to Santa Barbara and teach me how to use The 30 Minute Vegan properly. By then, I'll have bought some fancy ingredients.

My eye landed on a recipe for Stellar Stuffed Mushrooms. Not only do I love the word "stellar," I also love stuffed mushrooms. Mark and Jennifer (the authors of the cookbook and, I assume, successful 30 minute vegans) suggest a pretty elaborate stuffing recipe. I decided to alter it to better fit my slacker lifestyle. For the stuffing, I used:

First, I pre-heated the oven to 450 degrees. I put all the ingredients (and the stems from the mushrooms) in the food processor until they looked stuff-in-able. I had bought about a pound of cremini mushrooms at the Isla Vista Coop to stuff. I greased a cookie sheet with olive oil and laid them all out on it, then overstuffed them with the mixture.

After baking for 15 minutes, the mushrooms looked like this: 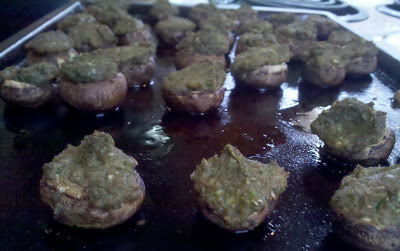 Everyone loved them. The best part about the 'shrooms (what makes them "stellar") is that they are so healthful. The only possible unhealthy part of the recipe is the olive oil with which I greased the pan, but that hardly counts.
I ate them with some carrots and parsnips that Emily had prepared. Please be advised that the photo below does not represent the amount of food I ate for dinner, by any means: 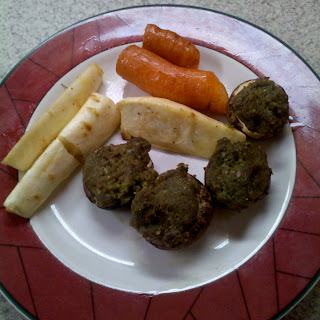 There were so many mushrooms that I ate some for lunch and dinner the next day as well. I had some leftover stuffing, too, so I refrigerated it to spread on crackers later as a snack. I severely altered the recipe from the cookbook, but once I purchase some fancy ingredients, I think I could be quite a successful 30 minute vegan.
Posted by Unknown at 8:44 AM