Chillin' Out, Maxin', Relaxin' All Cool in Philadelphia

I arrived in Philadelphia tired, hungry, and looking like a mad woman. I had taken the red-eye from LAX for my friends' wedding the following day, and I had made the mistake of not packing enough Clif bars. I had thought to bring instant oatmeal (with extra fiber!), but what good is a packet of instant oatmeal with no hot water and nothing to eat it out of? No good at all. I needed food if I was going to be any fun at the wedding festivities.

After checking in early at the Hilton Garden Inn, I booked it upstairs to the hotel restaurant. The host told me they were still serving brunch (it was 9:30am), and that it was an all-you-can-eat buffet. He got excited just telling me about it, listing all the yummy brunch offerings with relish: bacon, eggs any way you like them, sausage, omelettes, French toast... as he went on, it dawned on me that at this all-you-can-eat buffet, all-I-could-eat would be the breakfast potatoes, if they weren't roasted in butter.

I got embarrassed all of a sudden. I didn't want this over-eager hotel restaurant host to be disappointed that I didn't want anything to do with his all-you-can-eat brunch. So I lied. "My - uh - my... boyfriend is over there" - I gestured vaguely in the direction of the hallway - "so I'll just go get him and be, um, right back," I stammered with wild eyes. Then I ran away.

I felt hot and shaky on the elevator ride to my hotel room. It had been a while since I got all awkward about being a vegan - and why the stupid lie? I haven't lied about my boyfriend being "right over there" since fending off lecherous Italian men in Florence last summer. I was ashamed of being ashamed (and of having lied).

And I was still hungry. So instant oatmeal it was. I made the ridiculous decision to call the front desk to ask for a spoon to be delivered (because I was too embarrassed to face the restaurant host again myself), heated up some water in the coffee maker, and ate the oatmeal out of a coffee mug.

After such an absurd breakfast experience, I wanted lunch to be awesome. I was still on my own - the girlfriends I was rooming with weren't arriving until the afternoon - so I decided to take a long, leisurely walk to Govinda's restaurant.

Govinda's is a gem. I told the guys working there that I have a blog, and they encouraged me to take pictures and ask questions. Their suggestion for a classic Philly meal: a vegan chicken cheesesteak with soy chicken, veganaise, soy cheddar, and green peppers. More fake meat, I know, ugh. But Philly cheesesteaks are famous, so I wanted to try the closest thing I could get to one while I was there. Here's Mike grilling the soy chicken with green peppers: 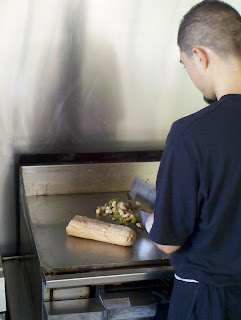 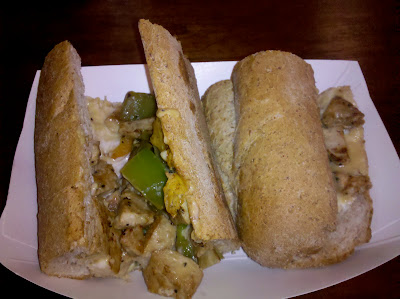 It was quite tasty. But I couldn't leave without taking a slice of oreo chocolate cake to go. When Mike told me every dessert in this case was vegan, I literally felt my mouth start to water. It was probably awkward for him. 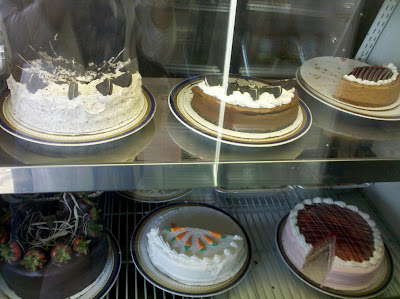 The coolest part about Govinda's was the crowd. As a blog-writing, yoga-pants-wearing student from southern California with a freaking feather extension in my hair, I was the only stereotypical vegan in the place. There was a group of black teenagers wearing sports jerseys, a couple of plump construction workers, and a businessman in a suit, all enjoying vegan takes on Philly staples. It was refreshing.

The wedding itself was on Saturday evening. It was a moving, inter-faith ceremony followed by a classy-raucous reception (with impromptu singing) and the whole thing was a total blast. The bride, Caroline (who is one of the kindest, most considerate people I know), had emailed me a few days before to give me a heads up that the reception dinner probably wouldn't be vegan-friendly, so I should plan to eat a big lunch beforehand. So I did! In fact, I ate a lot the entire time I was in Philly, planning around the wedding. (See pictures of meal highlights below.)

So what's the takeaway from my vegan adventure in Philly? It was fun to check out the vegan dining scene in a new city that's so different from Santa Barbara or LA. I'm grateful to have so many thoughtful, accommodating friends. Everyone was interested in talking about my blog and my veganism (whether or not they thought it was a crazy idea).

And it was weird to discover that, when it comes to turning down breakfast buffets, I'm still cripplingly awkward.