You wouldn’t guess it from looking at me, but my mother is 100% Italian. Growing up, I spent many a summer on Cape Cod grumpily smearing 50 SPF sunscreen all over my body, including inside my ears, and then crowding under a beach umbrella with my white-as-rice Irish father to watch the rest of my family (whom genetics had blessed with olive-colored, sun-resistant skin) frolic in the waves. Venturing out from under the umbrella meant burning like the proverbial roof, which is, if you recall, on fire.

Nevertheless, I got to embrace my Italian roots by enjoying my Nonna’s cooking every time we went to visit my mom’s parents in Winthrop. My Nonna was the kindest woman in the world, about four and half feet tall and no more than 90 pounds, but that lady could wield a wooden spoon. She’d playfully threaten to spank us with it and tell us to go make trouble somewhere else whenever we got in the way in the kitchen. She never actually hit us with it - we were her "little dah-lins," after all, and besides, the spoon was usually covered in tomato sauce.

For anyone who has never experienced Italian cooking, don’t take my word for it: go out and find yourself a little Italian Nonna and convince her to serve you some homemade ravioli. It won’t be hard – just tell her you’ve lost a lot of weight recently and you can’t figure out why. You won't even get to finish your sentence before the Nonna will be forcibly stuffing ravioli in your mouth and mumbling in Italian about how you need to learn to eat.

Now, I’ve spent three summers living and performing in Italy, I’ve been blatantly hit on by a few dozen Italian men, and I even speak the language. Despite all this, I feel like the worst Italian ever. Because recently, I vegan-ized ravioli.

I purchased a box of frozen vegan ravioli from Rising Moon Organics at Lazy Acres a few weeks ago. I couldn't bring myself to commit the blasphemy of making vegan ravioli by hand - a process that would involve fake cheese - so I went for frozen ravioli with a butternut squash filling instead. The pasta was made without eggs (unbleached wheat flour, water, semolina flour, and tumeric) and the ravioli were stuffed with butternut squash, dried cane syrup, potato flakes, onion, garlic, black pepper, nutmeg (all organic) and sea salt.

It totally baffled me that on the side of the box of vegan ravioli there was a recipe for a non-vegan cream sauce. Did the people at Rising Moon Organics honestly think that if I ate cream, I'd be purchasing their product? Because I wouldn't. I would be too busy devouring real ravioli filled with real cheese to have time to betray my Italian heritage.

I decided to use the non-vegan recipe on the box as a guideline and invent my own sauce. Here's what I used:

I heated it up in a pot while I microwaved the frozen ravioli. The combination of almond milk, agave, and butternut squash was heavenly: 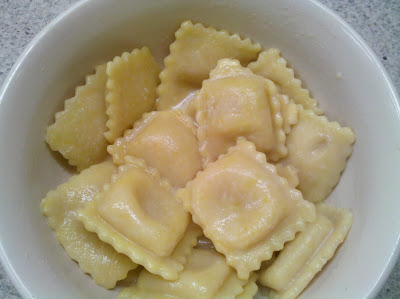 You can't really see the sauce, but trust me that it was there and it tasted good.

If my Nonna were alive, I'm sure she'd chase me down with her wooden spoon and spank me for being a bad Italian. But these ravioli actually tasted pretty good, and it's the first time I've invented a vegan pasta sauce. I call it Ravioli Vegan(i): senza uova e senza formaggio.