When I Dip You Dip We Dip

Last night, I attended a '90s-themed party at Old Town Tavern in Goleta. As I busted an awkward move on the dance floor to Freak Nasty's 1997 classic "Da Dip," I thought about two things. First, I thought about what an amazing dancer I am. This thought - though certainly untrue - often occurs to me after a few drinks. Second, I thought about how the title of the song adequately expressed the universal deliciousness of the black bean dip I had made earlier in the day.

I strive to cook like Emma, so I asked her to email me the recipe for the bean dip. She did, but I forgot to bring it with me when I went shopping for the ingredients at Trader Joe's. So I winged it, and it worked out pretty well. Here's what I used:

I decided to cook the black beans before adding them to the dip so they would be squishy and easier to eat. The avocado I used was not terribly ripe, but that just meant it stayed nice and green overnight in the refrigerator. We had gotten it in our CSA share the week before and I was getting impatient with it.

The above recipe makes a lot of bean dip. And it probably shouldn't be called "bean dip" since the ratio of red bell pepper to actual black beans ended up being pretty high. I think in the future, I'll just use half of a bell pepper.

But it was a hit! I brought it to my roommate Emily's birthday picnic on the beach and everyone liked it, vegans (me) and non-vegans like. Here it is, ready to be enjoyed with some pita triangles: 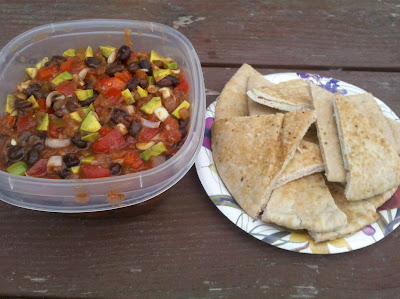 I was worried that I'd be serving it to the tune of, "When I Dip I Dip I Dip and Nobody Else Dips." But in this analogy, everyone at the picnic was glad to join in with my awkward dance moves and the dip got lots of compliments.