Feathers Are for the Birds: Why I Removed My Feather Hair Extension

The last time I had used the phrase, “But everybody’s doing it!” to justify a hair-fashion decision was in high school, when an ill-advised straightening treatment ended with a chemical burn on my forehead. A couple of weeks ago I used the phrase again, and I left the salon with a bright yellow feather hair extension.

Out here in southern California, it really does seem like everybody’s doing it. My feather looks pretty cool, and it definitely marks me as a trendy California girl – at a wedding I attended in Philadelphia last weekend, nobody knew what was going on with my extension. One of my girlfriends stared at it for a while before exclaiming, “Oh! That’s on purpose!” 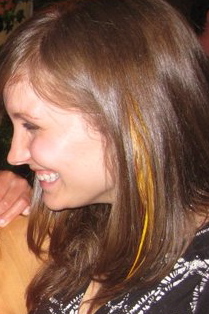 In fact, most of the conversations I had at the wedding started with a comment about either my veganism or my feather extension. But as it turns out, those two things aren’t compatible.

The feathers have to come from somewhere, and that somewhere is usually the rear end back of an unfortunate rooster. Until recently, these “saddle feathers” were used almost exclusively by fly fishermen. Now, rooster farms have to harvest up to 1,500 birds per week to keep up with all the business they're getting from hair salons. And according to Jesse L. Bonner at the Associated Press, most roosters don’t survive the plucking. (Update: roosters are actually put down first, then skinned to remove their feathers.)

Who’s to blame for this feather craze? Ke$ha, of course. In fact, tons of celebrities have been sporting this look, from Miley Cyrus to Rosanne Barr. Everybody’s doing it – but not me.

I’m getting my feather hair extension removed, just a couple of weeks after putting it in. Yes, it was a waste of $40. But as a vegan, I don’t support the exploitation of animals for food. So how could I support the killing of roosters for goofy hair accessories?

Let’s recognize the rooster-butt-feather-in-your-hair thing for what it is: as ridiculous as it sounds.

See this post on ThisDishIsVeg.com.
Posted by Unknown at 1:51 PM