Raw kale has always made me a bit nervous, because apparently it’s difficult to digest. My stomach doesn’t need an excuse to be difficult, so usually I braise my kale or just stir fry it in olive oil it with other greens.

But recently I heard through my friend Bonnie that our other friend Julie had an epic kale recipe. I’m not sure if she actually used the word “epic,” but I prefer that word to nearly every other adjective, so in my memory she used it.

This recipe was clearly at risk of becoming an epic fail (as is, to be fair, every recipe I attempt to make). Here's what Bonnie sent me:

I didn't have any kale this week because our CSA membership is over for the season. My roommates have graduated and moved out and I’m only around for another week and a half, so it looks like I’ll be buying my veggies at a grocery store or a farmers market until I leave. For this recipe, I purchased a bag of washed kale from Trader Joe's.

Let me tell you, this kale looked like it could use a massage. Especially after I chopped it up in little pieces. I didn’t have any lemon juice, so I massaged it with just the olive oil and salt. I imagined that to the kale, it felt like an exfoliating body scrub.

When the kale was looking satisfied and relaxed, I added a “splash” of orange juice and a “drizzle” of agave syrup (which I was substituting for the honey). Whoever indicates that you should use a "splash" or a "drizzle" of something in a recipe obviously has never cooked with me. What do these measurements mean? I am so confused by them. I sighed and did taste tests of the kale (which, by the way, was positively glowing after its massage) until it tasted about right.

I absolutely did not add the cayenne. I was already taking a risk by asking my stomach to digest raw kale – there was no way I was going to throw cayenne into the mix.

I stirred everything together, then tossed in some dried golden raisins and slivered almonds. Here’s what it looked like: 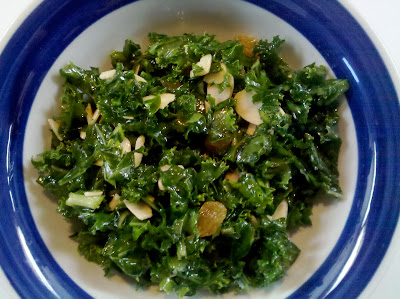 I shared it with Amy and we both agreed: it was delicious! The combination of olive oil, orange juice, and salt made the salad taste fresh and summery.

I waited a few hours to decide whether this recipe was epic kale or an epic fail - I wanted to give my stomach time to prove it could digest the raw kale. Then I forgot what I was waiting for because nothing happened.