When Andrew suggested we get dinner at a place called SteingartenLA the other night, I thought he was joking. Everyone knows Germans hate vegans, and a quick look at the SteingartenLA menu revealed that it was mostly a listing of different types of sausages. If there’s one thing I’ll never be invited to, it’s a sausage fest.

But then we watched the inspiring promotional video on their website. The whole message of the video is that they are dedicated to giving each customer the experience he or she wants. The video ends with the line, “No is not an answer, ever.”

Oh, really, Steingarten LA? No is not an answer… ever? I agreed to go there for dinner, but only because my obnoxious side was excited about trying to get my server to answer “no” to something.

After we got our drinks, I pretended to peruse the menu for a while, sipping my delicious Belgian beer and doing my best to look pompous. When the server returned to take our order, I kept a straight face as I asked, “So… the smoked BBQ pulled pork sliders. Are they vegan?” Andrew scooted down in his seat to try to hide behind his menu.

“No,” she answered. Well, that was easy. I opened my mouth to complain that their promotional video had incorrectly boasted that "no" was not an answer ever, but she went on to describe the vegan options they did have and how I could alter some dishes to make them vegan-friendly.

Then I just felt like a jerk. I was about to order the apple and sage sausage, but then the server offered too much information: “I think it’s the Field Roast brand, you know, that you can get at places like Whole Foods.”

Well, if I could get it myself at a grocery store, no way was I paying $7 for it at a restaurant. So I went with the Vegetarian Choice sandwich (Portobello mushroom, roasted bell peppers, herb roasted tomatoes, and green herbal sauce - no jack cheese). It came with fries, and both items were quite yummy.

The atmosphere at SteingartenLA is appealing, too, especially the outdoor patio area with Christmas lights, a fountain, and a fire pit. All in all, it was a great experience, just like the promotional video had promised.

I put one in a pan on the stovetop with some olive oil, but it looked kind of lonely on its own. If this was going to be a vegan sausage fest, I was going to have to eat more than one single sausage. So I cut off another link and put it next to the first one. Unfortunately, I got distracted by reruns of The Soup and ended up burning them on one side. It didn’t matter, though – they still tasted great in my quinoa: 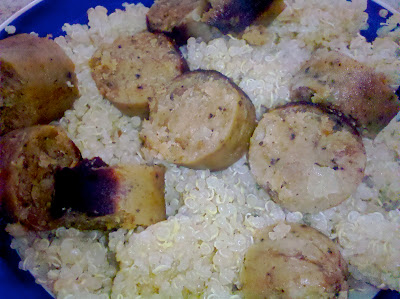 Was it a true sausage fest? No. Do I even know what a true sausage fest is? No, and I probably don’t want to. But I do know that SteingartenLA gets props for being a German sausage place with vegan options. Even if “no” has to be an answer sometimes.
Posted by Unknown at 2:25 PM