A few days ago, I discovered some troubling news about my friend Scott. He and his roommate had stopped by my apartment to eat some failed vegan cookies I had made using Frosted Flakes (unfortunately, they’re GR-R-ROSS!). They told me that they were on their way to the Isla Vista Co-op for the first time. Obviously, I wanted to accompany them so I could give them a little tour.

While we were walking through the produce section, I noticed Scott giving the vegetables a wide berth. If they had eyes, he would have been avoiding eye contact with them at all cost. “What’s wrong, Scott?” I asked. “This is just some fresh kale – and spinach – and look at all the different kinds of onions!”

His face blanched when I mentioned onions. “I hate onions,” he said. “They make me sick.” Fair enough, but what about all the other delicious-looking vegetables? “I’ve never… you know… eaten vegetables,” he explained. “It just never happened for me. Recently, I’ve started eating some cooked vegetables, like carrots, but I still can’t handle raw vegetables.”

How could somebody reach the age of twenty-eight and still be a veggie virgin? But somehow, Scott had managed to avoid eating vegetables his whole life, and he had even developed a repulsion for their raw texture. At first, I was speechless. Then I wouldn’t shut up – I spent the rest of the time we were on our errand lecturing Scott about how he needed to change his eating habits and pointing out how much healthier he would be if he became a vegan like me.

When we got back to our apartment complex, he spoke up. “I have a challenge for you,” he said. “I challenge you to come up with a vegan meal for me that is enjoyable, filling, and inexpensive. Maybe you can change my mind about vegetables.”

I felt like I was in one of those teen movies where a group of friends plots and schemes to help one of their buddies finally lose his virginity. Only there was much more at stake in the case of Scott’s veggie virginity - like his health. Of course I accepted the challenge.

Later that evening, he sent me an email with the parameters for the vegan meal I was tasked to find for him:

1) I dislike most raw vegetables, except for the occasional dark leafy greens
2) No onions
3) No celery
4) No peas.

After much consideration, I settled on pizza. I’d heard lots of good things about Pizza Guru on upper State Street but I’d never been there myself. They have wheat and gluten-free crusts options, a whole column on their menu labeled “veggie pizzas” with a note that everything can be made vegan if necessary, a special vegan white garlic sauce, and Daiya vegan cheese. I figured pizza was familiar, so it wouldn’t be too overwhelming for Scott – even when it was piled high with cooked vegetables.

We ordered the Pizza Nirvana: eggplant, roasted zucchini and mushrooms, bell pepper, onion, garlic cloves, greek feta cheese, vine tomatoes, and fresh basil. Of course we substituted Daiya for the feta cheese, and we asked for onions only on one half: 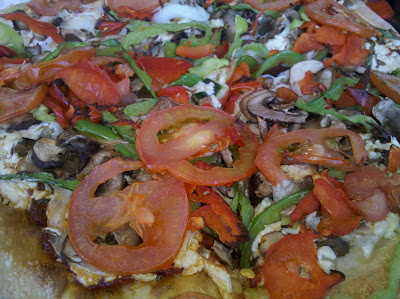 So did I successfully complete the challenge?

Yes! Scott ate his entire half of the pizza and reported being full and satisfied with the way it tasted. It will probably take him a while to get completely comfortable with vegetables, but this was an important first step. And it only took 15 minutes!
Posted by Unknown at 10:21 AM