This Little Vegan Went to Market

I spend as much time at farmers markets as I can. They tend to provide an awesome combination of good food, good energy, and samples I can actually eat. What happens when you throw in live music, pony rides, and a bunch of celebrities with babies strapped to their chests in one of those hippie baby-carrier things? You get the Santa Monica farmers market.

It’s (kind of) within walking distance of Andrew’s house, so this past weekend we decided to head over. The farmers market has a free bike valet system (seriously!), but I didn’t have my bike. It was a lovely walk, and by the time we got there we had definitely worked up an appetite for brunch.

I love the experience of perusing booths, especially when the sellers have a connection to their product. People selling the produce they farmed with their own hands are generally pretty friendly and motivated to convince you of their food’s deliciousness.

As I perused, I was impressed by all the raw food options. I've had only one raw experience in the past, so I wanted to see if I could put together a raw brunch.

I decided to make myself a little variety plate at the Planet Raw booth. (Side note: check out their website. It has an intense techno soundtrack.) I got a slice of apple pie with “kream” (it was spelled with a k on the menu for obvious reasons, but I don’t approve), two sushi bites, and a falafel ball with tahini sauce. 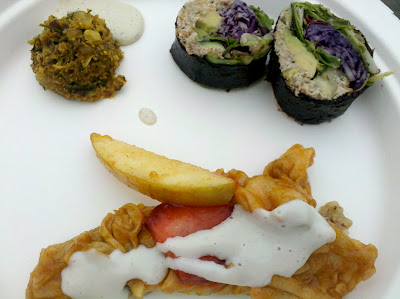 As I popped the sushi rolls in my mouth, I wondered aloud to Andrew what could be in them. “Rice isn’t raw, so that’s why they’re wrapped in seaweed. It tastes like cabbage, avocado, cucumber, and something fishy-tasting… I wonder what they used for fish flavor.”

Andrew stared at me for a moment and then answered, “Fish. Raw fish.”

Duh. Of course “raw food” is not necessarily vegan, so there was no reason why there shouldn’t be fish inside the sushi rolls I had just happily consumed. I groaned. I felt like a horrible vegan. And on top of that, I was still hungry.

So I hit up the Eupohoria Loves RAWvolution booth, mostly because I was intrigued by the name. RAWvolution is a food delivery system that will bring a box of raw goodies to your door each week, and Euphoria Loves RAWvolution is their restaurant in Santa Monica. The man at the booth gave me a free sample of the “egg” mixture, and I was sold. The burrito included oregano “cheese,” coconut jerky, walnut “meat,” mango salsa, and avocado.

Don’t ask me what walnut meat is. 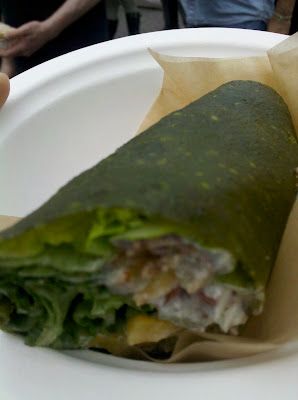 All in all, it was a successful trip to the farmers market. I just have to remember that “raw” and “vegan” aren’t synonymous to avoid future slip-ups!
Posted by Unknown at 5:12 PM